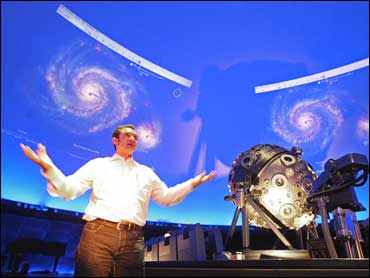 The heavens are only a few mouse clicks away with Google Inc.'s latest free tool.

A new feature in Google Earth, the company's satellite imagery-based mapping software, allows users to view the sky from their computers.

The tool provides information about various celestial bodies, from stars to planets, and includes imagery from the Hubble Space Telescope and other sources. It also allows users to take virtual tours through galaxies, including the Milky Way, from any point on Earth they choose.

"By working with some of the industry's leading experts, we've been able to transform Google Earth into a virtual telescope," Lior Ron, a Google product manager, said in a statement.

The new software also promises users the ability to see planets in motion and witness a supernova.

There are other programs and tools that provide information and pictures of the universe, but Google Sky blends it seamlessly, said Andrew Connolly, a University of Washington associate professor of astronomy and part of Google's visiting faculty program.

"What's unique about this is you have all of the imaging data over the whole of the sky actually streaming. So I can look at something that covers most of the sky, say our Milky Way Galaxy, and I can zoom right into a tiny galaxy that's in the formation cycle," he said.

Google engineers stitched together "terabytes and terabytes" of images and other data about the heavens, similar to how one might use a digital camera's panoramic feature to create a seamless image, Connolly said. A terabyte can hold the text of roughly 1 million books.

"Sky in Google Earth will foster and initiate new understanding of the universe by bringing it to everyone's home computer," said Dr. Carol Christian of the Space Telescope Science Institute.

Google Sky was developed at the company's Pittsburgh engineering office.

The feature, which is free, demonstrates Google's culture of allowing employees to think creatively aside from their core duties, said Andrew Moore, director of the Pittsburgh office.

Google, the leading Internet search engine, already provides surface images of Mars and the Moon through its Web site, along with animated and satellite-based maps of Earth.