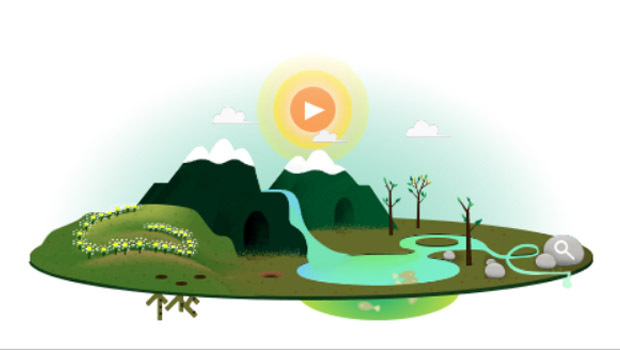 Google is commemorating Earth Day with an animated doodle showing a cycle of all four season. The search giant has been making quirky changes to its logo since 1998, and today, it is marking this annual day to reflect on our planet.

The first Earth Day was on April 22, 1970. More than 20 million Americans took part in the day's festivities. Earth Day was founded by former U.S. senator Gaylord Nelson, who was inspired by the passion of the anti-war movement. Nelson originally proposed a "national teach-in on the environment," according to the Earth Day Network, which organizes grass roots events for the day.

Earth Day came at a time when pollution was rampant and regulation was not commonplace. According to the Earth Day Network, Nelson was motivated to spreading awareness after following the events of a massive oil spill off the coast of Santa Barbara, Calif. in 1969.

At the State of the Union address on Jan. 22, 1970, President Nixon stressed the importance of environmental protection and said he asked congress to support a $10 billion clean water program.

"The great question of the seventies is shall we surrender to our surroundings, or shall we make our peace with nature and begin to make preparations for the damage we have done to our air, to our land, and to our water?" Nixon said in his speech.

After passing the Senate and the House, the U.S. Environmental Protection Agency was created on Dec. 2, 1970. Soon after, the Clean Air Act, Clean Water Act and Endangered Species Act were all signed into law.

Astronomers may have discovered evidence of an unseen planet in the farthest reaches of our solar system, almost 10 years after Pluto was demoted

Earth Day is now celebrated by about 1 billion people in 192 countries, according to the Earth Day Network.