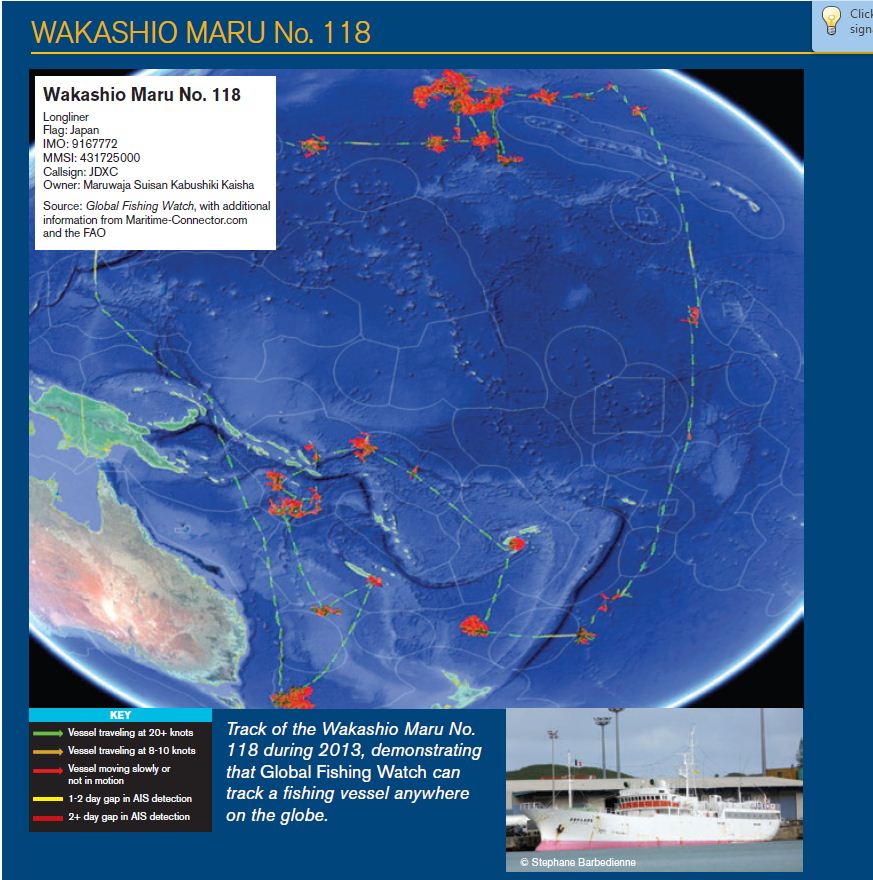 Efforts to fight overfishing on the high seas have long been hampered by a lack of enforcement and credible data.

That is about to change with the announcement that Google is teaming up with the environmental group Oceania and remote sensing specialist SkyTruth to create Global Fisheries Watch, the first-ever global tracking system of its kind. Global Fisheries Watch will launch next year and monitor commercial fishing around the world.

The platform - a prototype of which was unveiled Friday at the International Union for Conservation of Nature World Parks Congress in Sydney, Australia - will leverage GPS data used by 100,000 ships worldwide.

"So much of what happens out on the high seas is invisible, and that has been a huge barrier to understanding and showing the world what's at stake for the ocean," said John Amos, president and founder of SkyTruth, one of the first organizations to use satellite images to estimate the extent of the BP oil spill.

"But now, satellite data is allowing us to make human interaction with the ocean more transparent than ever before. Fishermen can show how they are doing their part to fish sustainably, we can motivate citizens to watch the places they care about, and we can all work together to restore a thriving ocean."

A combination of illegal fishing, poor management and far too many subsidized fishing fleets are to blame for overfishing. Nearly one-third of marine fish stocks worldwide have been overfished, and 90 percent were assessed as fully fished or overfished in 2011, according to the United Nations Food and Agriculture Organization.

Some of the worst problems occur in the developing world where a lack of money and manpower has made it all but impossible to police their fishing grounds. Further out in the high seas, there are few regulations, and those that exist often depend on the good will of the fishing fleets to report their catches.

"We know our fisheries are overfished and most of the important fish stocks are collapsing," said Jackie Savitz, Oceania's vice president for U.S. Oceans.

"We can bring them back with good management. But if those polices are not enforced, they don't work," she said. "The purpose of this tool is to create pressure for that enforcement. So we hope that this tool will allow the public to pressure government to enforce the laws."

Savitz said she envisioned the tool to be used by governments, scientists and international organizations to catch illegal fishing, better monitor protected areas, and gather data on trends of fishing for particular species. It could also be used more broadly to track fleets and better understand hot-spots for illegal fishing and those nations most responsible for it.

"The uses are almost endless," she said. "We can use it to track a blacklisted vessel that is known to be fishing illegally. We can look at whether people are fishing in no-take marine protected areas. In areas where you need a special license to fish, such as the high seas, we can see whether people fishing there have the necessary registration."

Google said its involvement is part of a larger push to use its technology to address global conservation issues. It already has invested in a system called Global Forest Watch which monitors the world's tropical forests and has provided a $5 million to the World Wildlife Fund (WWF) to help it combat wildlife poaching.

"We said, how can Google bring its technology to play to address global-scale issues around environment, sustainability and climate change," Brian Sullivan, the program manager of Google Ocean & Earth Outreach, told CBS News.

"When we look at overfishing, it's affecting the entire planet. It has that big impact piece to it," he said. "Hundreds of millions of people either derive their main source of protein, livelihood or other things from the ocean."

Sullivan said the system will help bring transparency to an industry often cloaked in mystery and confusion.

"Just for the prototype, we are starting with close to 4 billion data points, filtering through that and doing classifications on that," he said. "When we show the visualizations that was never possible before, anyone looking at that monitor within 5 seconds can start making inferences of what is happening there. We think that is extremely powerful."

But Savitz acknowledged the system will have its limits, including the fact that ships can choose to turn off the tracking system known as the Automatic Identification System (AIS). Even so, governments or other organizations could identify those not using their systems to raise questions about their fishing activities.

"That is one of the biggest challenges. It can be turned off," she said. "One of the first things we will do is expose people doing that. We can actually see them turning it off so we will use that information of enforcement of the AIS itself."