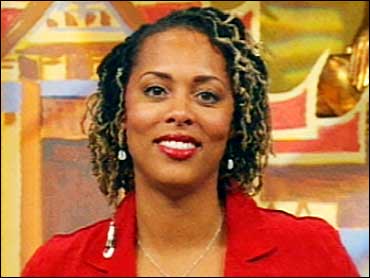 The tribe has spoken once again, and this time it said goodbye to legal secretary Ghandia Johnson.

"You can play the game or the game can play you," she told Julie Chen Friday on The Early Show. "I got played. And I played myself, too."

Ghandia, who was named after Mahatmas Gandhi, said that in hindsight she should have downplayed the incident in which Ted, she said, groped her as she slept.

But she admitted to playing the gender card. "I believe that the tribes just started - our tribe naturally split into men and women because of the nature of the incident that was embellished by myself. I was trying to rally the women for me. "

Chen want to know why, when telling the women in her tribe about the Ted incident, she left out the part that he had apologized to her.

"Because it made it better! They like my side better. Come on; be for real. I was playing a game. Part of it was strategy."

Chen noted that Ghandia had accepted Ted's apology. Why?

"Because at the time, it was something that was calming the situation, between he and I. And it was a temporary - it was like putting a Band-Aid on a broken arm for me, really. And then also you have to think you're still playing a game. I'm still trying to win a million dollars."

Still, Ghandia knew the gig would soon be up for her.

"You could feel all the tension out there. You could cut it with a machete, I guess. It was very - you could feel it. Very tense."

"It's funny the game, the way it is. But with the kind of situation that I went through -- you can become volatile. You can freak out. You know. As we saw.

"When it got back to me that he (Ted) had said to Brian nothing happened. That's when I just freaked out. I lost it. That's when evil diva Ghandia lost her head."

Russ Mitchell asked, "Did we see the real Ghandia in this show?"

"Yes," she replied. "Both sides of me. The nice side and the not-so-nice side."

And she said that the Ted incident did create some tension when she returned to her husband, "But the one thing about my husband that is absolutely fabulous is that we have a good, strong love. We have a wonderful bond, and we love each other. So we're kicking it."

And with typical Ghandia elan, she said, "He understood the risk that he was taking...He knows he has a very beautiful - you know, fine, sexy wife. So he knew."

After losing the immunity challenge Ghandia succeeded in convincing Jan to back her, but it was Helen, the navy swim instructor who would cast the deciding vote. Helen, who never thought she'd be the vote swinger, ended up voting in a way to best protect her own chances on the island -- she too ousted Ghandia.

In the end, it was high drama -- but expected -- that the 33-year-old Denver native would be the latest to have her torch extinguished. After leaving the tribe, Ghandia admitted, "I made a big mistake trying to play one side against the other."

Would she repeat the Survivor experience?

Ghandia Johnson will chat with viewers Friday at 2:30 p.m. ET on CBS.com.