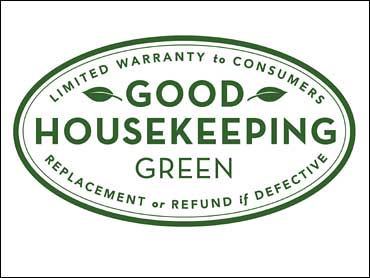 For a century the Good Housekeeping Seal has guided consumers to wise purchases. Now the magazine is hoping it will lead them to environmentally friendly ones as well.

In its April issue, editor-in-chief Rosemary Ellis announced the magazine will add a second, Green Good Housekeeping Seal to its quality-assurance arsenal. Good Housekeeping stepped into the green movement when it found its readers were interested in buying eco-friendly products, but found themselves lost in a marketplace of green garble, Ellis said.

"Marketers were slapping a lot of words on products sometimes legitimately, no doubt, sometimes not so legitimately," Ellis said, ticking off labels like "natural" and "organic."

"It just became clear consumers were confused and frustrated," she said.

Products that have already won the original seal issued by the Good Housekeeping Research Institute can now ask to also be evaluated for the green seal. The magazine, with a circulation of 25 million, has partnered with the Santa Barbara, Calif.-based environmental consultancy firm Brown & Wilmanns Environmental to develop its green criteria.

The magazine and the firm will look at a product's composition, manufacturing and packaging before deciding if it will receive the green seal. Separate criteria will be developed for different categories of products, including appliances, electronics and health and beauty aids.

The green seal has the same sleek look as the original Good Housekeeping Seal, but is a dark green color and has leaves on either side.

Determining what products get the green thumbs-up will include evaluating its health value and toxicity, said Michael Brown, of Brown and Wilmanns.

"It's a combination of looking at the materials that go into the product, aspects of waste, energy use, water use and certainly the potential health impacts associated with the product," said Brown, whose firm will train Good Housekeeping researchers to test products against the decided green criteria.

"There is so much greenwashing that's going on," Roberts said. "People are becoming more and more aware and cynical. The potential for an organization that does have a good reputation and stands behind it, that could be good for consumers."

Another key to success will be giving consumers a place to find and review the green criteria, said Boulder, Colo.-based green building expert David Johnston, author of "Green From the Ground Up."

"Transparency is fundamental to making this really valuable," Johnston said. "If that's there and they're rigorous, then this is performing a service. It takes someone of their scale to make it work."

Good Housekeeping feels like it is outlining those strict standards and will make any criteria available to its readers, Ellis said.

"We want people to be able to see how we arrived at the decisions. Not every green advocate will be happy, but we've bent over backward," Ellis said.

Good Housekeeping thinks it deserves a piece of that market.

"None of them, I would say, has been able to cut a wide swath," Ellis said. "That's one reason we think Good Housekeeping is an ideal entity to do this. I think a lot of readers will say, 'What took you so long?"'

No matter the timing, the Good Housekeeping brand name alone will give consumers confidence to trust that what they're buying is environmentally friendly, said Jordana Gustafson, editor at the green living review Web site SustainLane.com.

"Just seeing that seal on a product will make people grab it off the shelf," Gustafson said. "Companies will want that seal (on their products)."