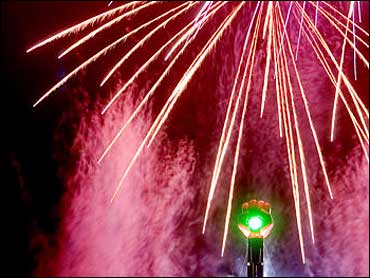 With a deafening boom, the ashes of Hunter S. Thompson were blown into the sky amid fireworks late Saturday as relatives and a star-studded crowd bid an irreverent farewell to the founder of "gonzo journalism."

As the ashes erupted from a tower, red, white, blue and green fireworks lit up the sky over Thompson's home near Aspen.

The 15-story tower was modeled after Thompson's logo: a clenched fist, made symmetrical with two thumbs, rising from the hilt of a dagger. It was built between his home and a tree-covered canyon wall, not far from a tent filled with merrymakers.

The private celebration included actors Bill Murray and Johnny Depp, rock bands, blowup dolls and plenty of liquor to honor Thompson, who killed himself six months ago at the age of 67.

Security guards kept reporters and the public away from the compound as the 250 invited guests arrived, but Thompson's fans scouted the surrounding hills for the best view of the celebration.

"We just threw a gallon of Wild Turkey in the back and headed west," said Kevin Coy of Chester, W.Va., who drove more than 1,500 miles with a friend in hopes of seeing the celebration. "We came to pay our respects."

Thompson fatally shot himself in his kitchen Feb. 20, apparently despondent over his declining health. The memorial, however, was planned as a party, with readings and scheduled performances by both Lyle Lovett and the Nitty Gritty Dirt Band.

The author's longtime illustrator, Ralph Steadman, and actor Sean Penn were on the invitation list, along with Depp, who portrayed Thompson in the 1998 movie version of "Fear and Loathing in Las Vegas: A Savage Journey to the Heart of the American Dream," perhaps the writer's best-known work.

"Over the last few months I've learned that he really touched people more deeply than I had realized," said Thompson's son, Juan.

Thompson's longtime friend George Stranahan lamented the Hollywood-style production. "I am pretty sure it isn't how Hunter would have done it," he said. "But when your friends make a mistake you support them."

Anita Thompson said Depp funded much of the celebration.

"We had talked a couple of times about his last wishes to be shot out of a cannon of his own design," Depp told The Associated Press last month. "All I'm doing is trying to make sure his last wish comes true. I just want to send my pal out the way he wants to go out."

Thompson is credited along with Tom Wolfe and Gay Talese with helping pioneer New Journalism; he dubbed his version "gonzo journalism," in which the writer was an essential component of the story.

He often portrayed himself as wildly intoxicated as he reported on figures such as Jimmy Carter and Bill Clinton. At the height of the Watergate era, he said Richard Nixon represented "that dark, venal, and incurably violent side of the American character."

Besides the 1972 classic about Thompson's visit to Las Vegas, in which the central character was a snarling, drug- and alcohol-crazed observer and participant, he also wrote an exposé on the Hell's Angels and "Fear and Loathing: On the Campaign Trail '72."

The Kentucky-born writer also was the model for Garry Trudeau's balding "Uncle Duke" in the comic strip "Doonesbury."

In now-chic Aspen, Thompson was an eccentricity: he proudly fired his guns whenever he wanted, let peacocks have the run of the land and ran for sheriff in 1970 under the Freak Power Party banner.

Composer David Amram, a friend of Thompson since the early 1960s, said Thompson had never expected to be successful taking on President Nixon during the Watergate era. "He thought he would be banned or put on an enemies' list," he said.

Thompson made himself the centerpiece of his stories "to show that a regular person could be in the midst of the craziness of the time," Amram said. "He was our historian."

After his suicide, one close acquaintance suggested Thompson did not want old age to dictate the circumstances of his death. Anita Thompson said no suicide note was left.