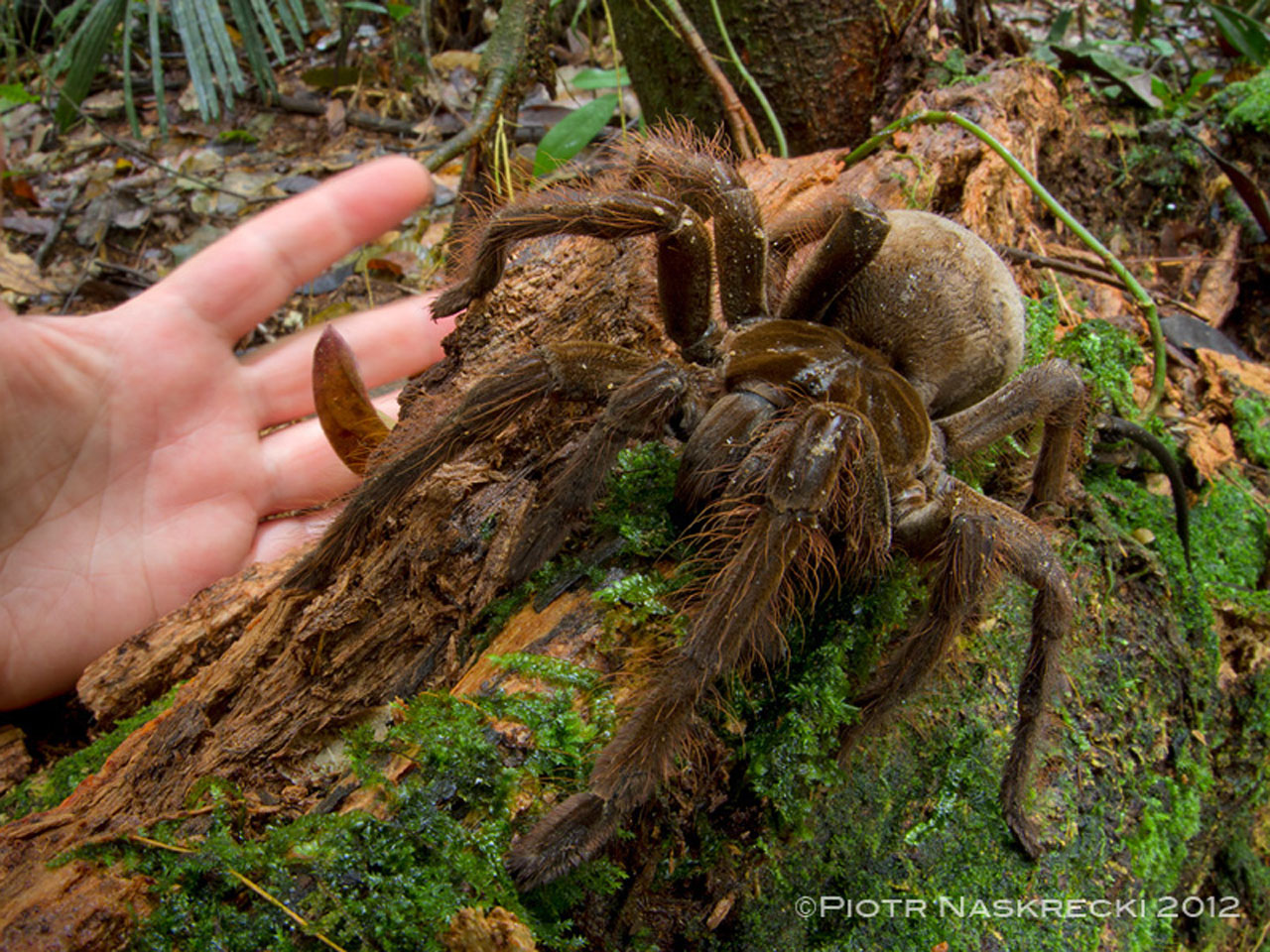 Piotr Naskrecki was taking a nighttime walk in a rainforest in Guyana, when he heard rustling as if something were creeping underfoot. When he turned on his flashlight, he expected to see a small mammal, such as a possum or a rat.

"When I turned on the light, I couldn't quite understand what I was seeing," said Naskrecki, an entomologist and photographer at Harvard University's Museum of Comparative Zoology.

A moment later, he realized he was looking not at a brown, furry mammal, but an enormous, puppy-size spider.

Known as the South American Goliath birdeater (Theraphosa blondi), the colossal arachnid is the world's largest spider, according to Guinness World Records. Its leg span can reach up to a foot (30 centimeters), or about the size of "a child's forearm," with a body the size of "a large fist," Naskrecki told Live Science. And the spider can weigh more than 6 oz. (170 grams) -- about as much as a young puppy, the scientist wrote on his blog. [See Photos of the Goliath Birdeater Spider]

Some sources say the giant huntsman spider, which has a larger leg span, is bigger than the birdeater. But the huntsman is much more delicate than the hefty birdeater -- comparing the two would be "like comparing a giraffe to an elephant," Naskrecki said.

The birdeater's enormity is evident from the sounds it makes. "Its feet have hardened tips and claws that produce a very distinct, clicking sound, not unlike that of a horse's hooves hitting the ground," he wrote, but "not as loud."

When Naskrecki approached the imposing creature in the rainforest, it would rub its hind legs against its abdomen. At first, the scientist thought the behavior was "cute," he said, but then he realized the spider was sending out a cloud of hairs with microscopic barbs on them. When these hairs get in the eyes or other mucous membranes, they are "extremely painful and itchy," and can stay there for days, he said. [Creepy-Crawly Gallery: See Spooky Photos of Spiders]

But its prickly hairs aren't the birdeater's only line of defense; it also sports a pair of 2-inch-long (5 centimeters) fangs. Although the spider's bite is venomous, it's not deadly to humans. But it would still be extremely painful, "like driving a nail through your hand," Naskrecki said.

And the eight-legged beast has a third defense mechanism up its hairy sleeve. The hairs on the front of the spider's body have tiny hooks and barbs that make a hissing sound when they rub against each other, "sort of like pulling Velcro apart," Naskrecki said.

Yet despite all that, the spider doesn't pose a threat to humans. Even if it bites you, "a chicken can probably do more damage," Naskrecki said.

Despite its name, the birdeater doesn't usually eat birds, although it is certainly capable of killing small mammals. "They will essentially attack anything that they encounter," Naskrecki said.

The spider hunts in leaf litter on the ground at night, so the chances of it encountering a bird are very small, he said. However, if it found a nest, it could easily kill the parents and the chicks, he said, adding that the spider species has also been known to puncture and drink bird eggs.

The spider will eat frogs and insects, but its main prey is actually earthworms, which come out at night when it's humid. "Earthworms are very nutritious," Naskrecki said.

Birdeaters are not very common spiders. "I've been working in the tropics in South America for many, many years, and in the last 10 to 15 years, I only ran across the spider three times," Naskrecki.

After catching the specimen he found in Guyana, which was female, Naskrecki took her back to his lab to study. She's now deposited in a museum.

Check this before you buy a used phone
Thanks for reading CBS NEWS.
Create your free account or log in
for more features.
View CBS News In
CBS News App Open
Chrome Safari Continue
Be the first to know
Get browser notifications for breaking news, live events, and exclusive reporting.