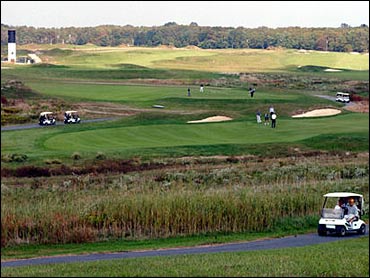 From the 100-foot bill of the 12th tee at McCullough's Emerald Golf Links, players negotiate undulating, treeless fairways dotted with sand traps. The casinos of Atlantic City glitter 10 miles away.

Only the clear flame burning from a 20-foot smokestack in the middle of the course, and methane well covers that warn against smoking, give golfers a hint that they are standing atop mounds of garbage.

Mounds, that is, that were capped, covered with 2 feet of soil, threaded with drainage and gas collection systems, topped with grasses, and interspersed with 18 flagsticks, fairways and greens.

The holes on the manicured course are softened versions of legendary European holes. Players at McCullough's and a growing number of other layouts have found that a course doesn't have to be trashy just because it's built on garbage.

About 70 of the nation's nearly 16,000 golf courses utilize old landfills, strip mines or industrial "brownfields," a concept that began 40 years ago and is picking up steam despite higher development costs, experts said.

Although the trend preserves open spaces, some environmentalists are opposed to the approach, cautioning that blighted land requires constant monitoring and poses unknown health risks.

The trend is not without controversy. A multiyear battle by New York City environmental groups failed to halt work on a course being built atop an old landfill in the Bronx.

Of the nearly 250 courses that opened in 2002, about 10 are on so-called "brownfields," estimated Roy Case, a golf course architect.

"I think they will increase. It's putting land that's useless right now into some sort of public use," said Case, whose Case Golf Co. is based in Lake Worth, Fla.

Many courses built on reclaimed land, like McCullough's, are owned by towns and near population centers, so the fees and the course are within reach of the duffer of average means, he said. At McCullough's, a weekday round costs $60; $39 for township residents.

"In most cases, they're developed for what I call blue-collar golf, which still needs a lot more golf courses," Case said.

In recent years, courses on distressed land have sprouted around the nation: the Jack Nicklaus-designed Old Works Golf Course is at former strip mine in Anaconda, Mont.; while a former landfill just 15 minutes from downtown Houston now hosts the 36 holes of Wildcat Golf Club that were designed by Case.

A waterfront landfill on Chicago's industrial south side became Harborside International Golf Center in 1995, and hosted the 2002 SBC Senior Open.

Other brownfield courses have opened and are being built in the Garden State, including a four-course project on 950 acres of landfills in the Meadowlands, and the Bayonne Golf Club atop a former dump in the shadow of the Statue of Liberty.

The makeover at McCullough's succeeded with Jim Burr, who did not realize he and his buddies were playing on a former municipal dump.

Another member of the foursome remembered how it used to be. "It's definitely better than a landfill. It doesn't stink," said Eric Austin, 27, of Palmyra.

The trend toward building on distressed land is giving golf courses a second look from environmentalists, who have long complained courses use too much water and produce runoff laden with pesticides, herbicides and fertilizer.

The Meadowlands project, consisting of two public and two private courses, is to use only storm water captured at the site and treated wastewater to keep the greens and fairways green, noted Capt. Bill Sheehan, head of the Hackensack Riverkeeper environmental group.

"That actually makes their impact on the local drinking water supply disappear," Sheehan said. Also, the golf course is to only use organic pesticides and limit pesticide use.

The developer, EnCap Golf Holdings, has agreed to close seven landfills, a $300 million cleanup that will prevent an estimate 12 billion gallons of decomposing landfill from oozing into the estuaries by the New Jersey Turnpike, according to the New Jersey Meadowlands Commission.

Although courses built on landfills are monitored, a scientist with the Center for Health, Environment and Justice is not convinced that course operators are up to the challenge.

"There are a range of volatile chemicals that are typically found in general, household garbage landfills," said Stephen Lester, including benzene and vinyl chloride, which have been linked to cancer in humans.

While the Environmental Protection Agency maintains that the small amounts of such agents pose little risk, "We believe that they are toxic in small quantities, especially in combination," Lester said. However, he notes no studies specifically address the results of exposure to such gases.

The most common landfill gas is methane, which is produced from decaying organic material and is not considered toxic, but which can be explosive if ignited. But burning it, as several courses do, can produce toxic chemicals, according to a center report on landfill gases.

Egg Harbor Township leases the land atop the landfill from its owner, Allied Waste Industries Inc., one of the nation's largest trash hauling and disposal firms. Allied has two full-time workers at McCullough's, and is responsible for collecting, treating and monitoring the gas and liquid produced by decomposition in the landfill, township administrator Peter J. Miller said.

"If you come on the golf course to play, your health is not at risk," Miller said.

He said surveillance techniques have continually evolved, and are a far cry from the practice in the 1960s of building school athletic fields atop uncapped landfills.

The Bronx project, Ferry Point Golf Course, was opposed by environmental groups who maintained the construction plan was flawed and now has directed methane toward nearby housing, said Timothy Logan of the New York City Environmental Justice Alliance.

Edward C. Wallace Jr., a lawyer for the developer, Ferry Point Partners, said the plan was approved by a variety of agencies, including the local community board, and there is no adverse impact. The 18-hole layout on the East River, another Nicklaus design, is to open in late 2005, Wallace said.

Constructing a public golf course usually costs about $3 million to $4 million, not including land acquisition, and turning a dump into a golf course raises the construction cost about 25 percent, architect Case estimated.

But that can quickly escalate on difficult projects. For instance, the Harborside courses that opened in Chicago in 1995 and 1996 cost $15 million, according to its owner, the Illinois International Port District. Costs for the Bayonne course are expected to easily exceed that.

"It's turning garbage into gold, I guess, in a sense," said Dick Nugent, who designed Harborside with his son, Tim Nugent. "It's more expensive to do this, but it's expensive to do anything there."

"They are among the most expensive courses to build, because you're not just building golf, you are reclaiming the land," Ron Whitten, the architecture editor for Golf Digest who has visited thousands of courses over the past 20 years. "On the other case, they are a vast improvement over an open sore or a capped sore."