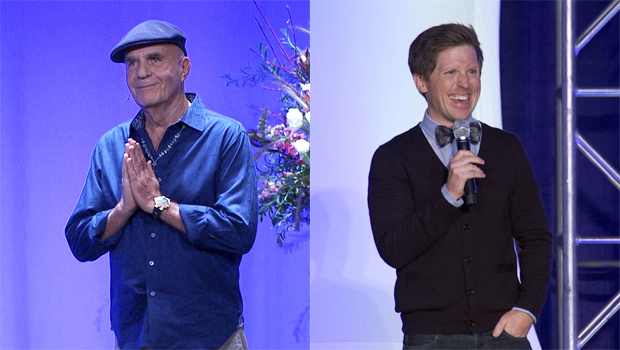 "Can do" are two words that can move mountains - or, at the very least, fill auditoriums with people eager to be motivated to turn their lives around. Our Cover Story is reported by Tracy Smith:

Maybe you can't buy success or happiness, but there are plenty of people willing to help you find both.

We found one of the biggest names in motivational speaking last month in Pasadena, Calif., at a self-help seminar called -- appropriately enough -- "I Can Do It."

To his fans, Dr. Wayne Dyer ("the father of motivation") is to speaking what Bruce Springsteen is to music.

"I love Wayne Dyer," one man said. "Wayne is one of my favorite speakers."

Chris Ward told Smith hadn't seen Dyer in person before: "But every time I see him on PBS I start crying, so I know I'm supposed to see him, and maybe today is the day."

DYER: "We find ourselves giving up on our magnificence."

"Take the last five minutes of your day," he said, "and put your attention on everything that you would like to attract into your life: 'I am well. I am healed. I am in perfect health. I am abundant. I am happy.' Say those things to yourself. Then you'll marinate for eight hours, and you'll awaken and you'll begin to attract the things that are in your subconscious mind."

DYER: "We've been programmed, from the time that we were very, very little, about what we can't do, about what is impossible."

Dyer's own story is motivating in itself: He rose from an orphanage to become one of the best-selling authors ever.

But while his message is unique, he has plenty of company on the speaking circuit.

According to the National Speakers Association, there more than 40,000 paid speakers in the U.S., and roughly a third -- around 13,000 -- work primarily as the motivational kind. It's something that could happen only in America, says author Jonathan Black.

Smith asked, "Is there something about Americans that makes us more receptive to these motivational messages?"

Black said, "There definitely is. One is this sort of impulse we have to improve ourselves. And at the same time Americans are constantly disgruntled. We always want something better. We want a better husband or a wife or job or money or house. 'We can do better and we don't really like the way things are.'"

That said, people have always liked a good speech, from Pericles' funeral orations, to Patrick Henry's call to arms, to the pep talk in the movie "Patton." [As actor George C. Scott put it, "Americans love a winner, and will not tolerate a loser."]


WEB EXTRA: Dr. Wayne Dyer's top 5 motivational speeches of all time
"Sunday Morning" asked the self-help author for his favorite addresses aimed at elevating and moving an audience to action


Back in the 1970s, salesman-turned-motivator Zig Ziglar was changing lives one well-turned phrase at a time.

ZIGLAR: "Now's the best time you'll ever have in life to get ahead!"

And by the '80s, a Tony Robbins seminar might include not only a speech --

ROBBINS: The order and sequence in which you create pictures, sounds and feelings will determine your success or failure in any task.

But the best time to be a speaker could be right now.

Brian Palmer, who runs the Chicago-based National Speakers Bureau, says, "the business is very healthy and we'll end up with our best year ever."

Palmer says he sees 15 new speakers a week -- and turns most of them down.

Just like Chris Farley's classic "SNL" sketch ["Well, I'm here to tell you that you're probably gonna find out, as you go out there, that you're not gonna amount to Jack Squat! You're gonna end up eating a steady diet of government cheese and living in a van down by the river!"], not everyone who THINKS they can motivate actually can.

"There are a lot of people that want to speak that think that I'm an ass because I don't want to book them," said Palmer. "I've hurt some feelings. But I'm not there to make somebody's career. I'm there to make judgments who's good, who's very good, and who's excellent."

To help sort them out, he uses a trick his dad, a former bandleader, picked up from Phyllis Diller, who would ask him to measure the time between the big laughs in her act. The goal was at least one every two minutes.

Turns out, it's a good rule of thumb for motivational speakers, too.

Palmer will use a watch to time how often there's a laugh or some sort of emotional response. "There's an old saying in the speaking business: 'Do you have to be funny to be a public speaker? And the answer is no, unless you want to get paid,'" he said.

Palmer says his agency's average booking is around $20,000 a speech.

What's more, 80 percent of motivational speakers now sell something besides their pep talk.

But merchandise is only the beginning.

SHIPP: "It is your imperfections that make you human, and your humanity that makes you influential."

Thirty-two-year-old Josh Shipp turned a very rough childhood -- and a talent for talking to young people -- into a career. As a teen he'd amuse his fellow students for $75 a speech. Today, he delivers a targeted message of hope over adversity, and gets a five-figure check every time he takes the stage.

Smith asked, "How much of your income comes from speaking?"

Now, he's also training other speakers. Shipp started the Youth Speaker University, a for-profit school for the growing number of people who think they have what it takes to motivate.

"There's sort of that undefinable 'it' factor that I look for when I'm mentoring speakers," said Shipp. "There's something that they have to get on their soapbox about. Give me that person, and I can eventually turn you into a successful speaker."

"Successful," as in getting paid for it.

And that's something he's learned all about.

When Smith asked Shipp, who's in his early 30s, for an idea of his overall worth, he replied, "I mean, certainly my cash net worth would be in the seven figures."

"So speaking's a good gig?"

Bottom line: Talk isn't always cheap, nor does it need to be, as long as there are people motivated to buy it.

Smith asked, "What do you say to folks who say, 'This is a bunch of baloney'?"

Dyer replied, "Because you don't have to be sick to get better."


WEB EXTRA: Dr. Wayne Dyer's top 5 motivational speeches of all time
"Sunday Morning" asked the self-help author for his favorite addresses aimed at elevating and moving an audience to action