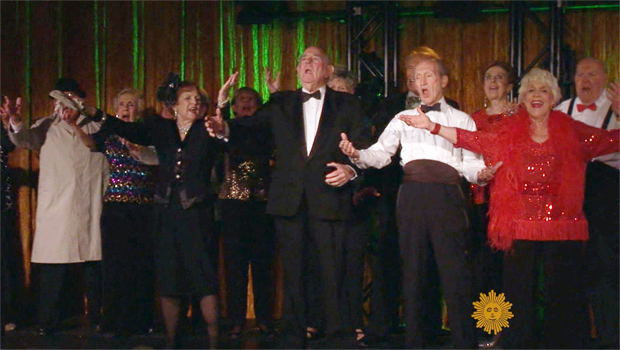 You can't get blood out of a stone, they say. But in Stone Mountain, Georgia, you sure can hear some unbelievably full-blooded SINGING voices. Some of the best you'll ever hear. Bill Geist went there to hear for himself:

The talent is stunning. Listen to those voices! Oh, wait, they're not exactly singing.

In the outside world, lip-synching is often scandalous. Here, under 91-year-old director Marvin Himmel, it's an art.

Marvin is the Lord of lip-synch. "I was the originator in vaudeville of the lip synching," he told Geist. "I would call it 'pantomimicry.'"

He and two college classmates gained a measure of fame mimicking the Andrew Sisters back in the early 1940s, as "The Three Make-Believes."

After a long career of managing conventions, Marvin's back doing what he loves. His cast members lip-synch so well they sometimes fool people.

"People would come up to my husband and say, 'I didn't know that Shirley could sing like that,'" said one cast member. "And he'd say, 'Well, those voice lessons have finally paid off!'"

Marvin is a perfectionist. ("Your lip-synching is shallow!" he berated one player.) This may not be Broadway, but dammit, the show's gotta be good. ("Stop stop stop! Why do you insist on being at the back of the stage?!")

"We ain't no delinquents,
We're misunderstood.
Deep down inside us there is good. (There is good!)"

"At my first rehearsal, he's barking like a Marine drill sergeant!" said Phil Arnold. At 74, Arnold is considered a child actor.

Avis Fox, 82, is a veteran. She has been in the show all eight years. On working with Marvin, Fox says, "He's wonderful and amazing."

And what is Marvin's view of his cast? "They mean so much to me, particularly since my wife passed away. I mean they're my family."

But he does practice "tough love" with them. "I tell 'em there's certain rules," Marvin said. "One, you don't talk. I don't need any help. You just take direction."

Marvin is producer, director, stage manager and writer. In the weeks and months leading up to the show, he can be seen zipping this way and that through the hallways on his Golden LiteRider Scooter tending to every minute detail.

Excitement builds as showtime nears. "The adrenaline is way up!" one woman said.

The four-night run is completely sold out.

"Come and meet those dancing feet,
On the avenue I'm taking you to,
42nd Street."

The show is a combination of raucous numbers, and some touching ones that seem particularly poignant.

Geist asked, "What do you think this means to these people, to be involved in this?"

Marvin replied, "I'll put it this way: The title of the show is 'Forever Young, For Evermore,' and that's a big part of it. They feel young, they feel vibrant."

And what does it mean to Marvin? "Oh, love," he said. "I love these people. I love the theatre, and I love to be able to create these things. They mean so much to me, because they just lift me."