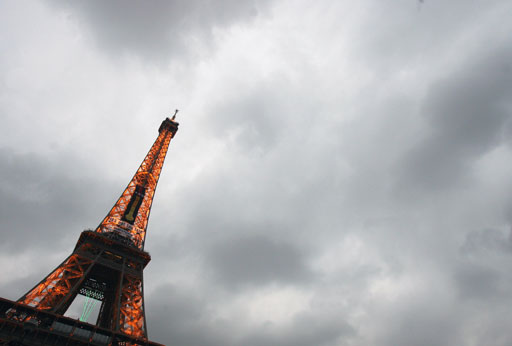 It was a different kind of story for CBS News Political Correspondent Phil Jones, the assignment to cover the 25th annual James Dean Festival in Fairmount, Ind. It was unusual not only because Fairmount is far from Washington and the congressional politics that Jones covers, but also because it is Jones' hometown, too. Here's the story he filed for CBS News Sunday Morning.

It has become a ritual, the walk from Back Creek Friends Church to the nearby Fairmount, Ind., cemetery to honor and remember James Dean, who was buried there in 1955. He was only 24.

All of us from this small rural community of about 3,000, located in central Indiana, remember when he died. I was 18 when the news reached Fairmount that Dean had been killed in the crash of his sports car in California. Dean made three movies in his short life. With his very first film, East of Eden, our hometown boy had become a Hollywood star.

Marcus Winslow, Dean's cousin, particularly remembers when he first saw East of Eden at an Indiana movie house. He recalls, "I instantly knew it was Jimmy, and it just didn't seem to me like he was acting. It just seemed to me like it was Jimmy up there."

His final two films, Rebel Without a Cause and Giant, were released after his death. But America, especially young America, had already fallen in love with him, and the characters he portrayed. They were - all at the same time - shy, sensitive and rebellious.

Even those who don't make it to Fairmount every year vividly recall where they were the day they got the tragic news. Dennis Hopper, who played with Dean in Rebel and Giant, was sitting in a Santa Monica theater when he was told.

"I started crying, and I had to leave the theater. I had to leave the room. I went outside, and it was insanity for me. I mean, there were seances. People were saying they were seeing him, and he was talking to them," Hopper recalls. "It was a phenomenon like I've never seen before or since, ever."

There are not many farms in America where you'll see a big tour bus pulling into the driveway. It happens a lot to Winslow. But it's nothing compared to the 25th annual Fairmount Museum/James Dean festival - about 40,000 people

While it is true that Jones was invited back to serve as grand marshal of the festival's parade, it's also true that, on the signs leading to town, he is listed last among Fairmount's famous. Dean, of course, is first. Then comes Jim Davis, creator of the comic strip Garfield. Then, finally, is CBS News Political Correspondent Phil Jones, who asked Davis what Garfield the cat would think of James Dean.

Says Davis, who lives only about an hour from Fairmount, "You know, I think if I asked him, he'd be a big James Dean fan. He recognizes that rugged individualism....Garfield's always been one to speak his mind, and people identify with him, too, because e does resent authority."

Showing a photo of Dean on his motorcycle, Winslow recalls, "You could hear it coming all the way from Fairmount to home."

"He would kind of lay down on the cycle and just ride it as fast as it would go," he adds.

Everybody in Fairmount remembers all the racket that Dean used to make with his motorcycle, but it was nothing like his fans made at this festival. Every direction you looked, you saw old cars from the '50s and '60s, customized and cool.

In fact, 15 miles from Fairmount, there are signs reminding motorists they are entering "James Dean Country, Where Cool Was Born."

Mark Roesler manages the multimillion-dollar-a-year licensing of James Dean for the family. About 1,400 hundred products use his name and likeness, including Rebel cologne that comes with a pair of sunglasses. He says that a James Dean collectible doll will be unveiled by Mattel within the next few months.

Those in Jim Dean's high school class of 1949 don't appreciate the way some outsiders characterize their classmate. They remember him as a good student, straight as they come, popular with the girls, a terrific athlete, a star in basketball and baseball, a regular guy.

"I know these people are always saying that Jim was kind of weird and all this, but there's nothing weird about him. He was just like the rest of us," says Phyllis Cox, who was Dean's friend.

But amidst all the hometown celebration, the same question keeps coming back: Why did Dean become a living legend? Maybe actor Dennis Hopper has as good an answer as anyone out in Hollywood.

"Rebel Without a Cause is as fresh today, really, as it was when we made it, even though gang warfare and kids may be using guns now or knives and chain tires," says Hopper. "The idea is still the same. And still the parents, the parents losing touch with their children and the young people trying to find their own way and their own life."

And every year, fans and friends find their way to the grave site. It's on this occasion that all of us remember what the pastor said 45 years ago at Dean's funeral: "The career of James Dean," he said, "has not ended. It has just begun."