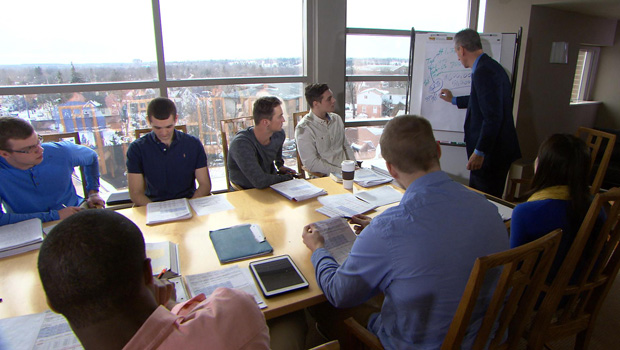 It's the first Sunday of the NFL regular season and taking the field later today will be a host of new players -- many of them newly-minted millionaires as well. While all are outstanding athletes, some may not be so outstanding when it comes to managing their newfound wealth. Lee Cowan reports our Cover Story:

The former Florida State quarterback signed with the Tampa Bay Buccaneers for a cool $25 million -- making him a pretty wealthy man at the age of just 21.

His skills are undeniable -- and yet even the greats in this game know that skills fade. But many young athletes don't think the money ever will.

"In reality, when I had all that money, money destroyed everything around me that I loved," said former linebacker Keith McCants. Once a fierce defensive player, he was a first-round draft pick out of Alabama back in 1990.

His contract: $7.4 million PLUS one of the largest signing bonuses ever offered to a rookie defender. "Feels great," McCants told ESPN. "It's a dream come true."

He was 20 year old, and became a millionaire overnight.

"Where did it all go?" Cowan asked.

"So who did you end up giving money to? Friends? Family?"

"Everybody. Anybody who asked. I was from Mobile, Alabama, I'm green. I'm gullible. I didn't know no better."

He made a string of bad investments. Friends he never knew he had, suddenly had a hand out -- and he says he never really knew how to say "No."

He's hardly an isolated case. From Mike Tyson to Bernie Kosar to Antoine Walker, there's a long list of pro athletes once worth tens of millions of dollars who have filed for bankruptcy.

"If you take the top 10 percent of all wage earners in professional sports out, about 90 percent are in financial distress five years after they retire," said Ed Butowsky. That's not an official number -- it's just what Butowsky has seen managing money for pro athletes for years.

"I had someone about three years ago, he called me. He said, 'I want to come in and talk about my portfolio.' And I looked him up and I realized that this man had made about $70 million in his baseball career. He walked in, I saw he had nothing in his hands. And I said, 'You told me you wanted to bring your portfolio for me to look at.' He says, 'I have. I have nothing.'"

The factors contributing to their financial fumbles are numerous. There are plenty of young stars who indulge, living fast, flashy and foolishly -- their egos inflated better than one of Tom Brady's footballs.

But the headlines are also full of those who have been taken advantage of by unscrupulous agents and managers who prey on those who don't know any better.

Which is why Butowksy started holding financial boot camps for athletes. "You just won't go broke if you listen to this," he says.

In addition to basic money management advice, he invites big-name veterans to warn rookies of the dangers wealth can bring.

"It's scary when young, immature kids get a lot of money into their pockets," Winfred Tubbs, a Pro Bowler who played with the New Orleans Saints and San Francisco 49ers, told his audience. "If we all made that money at the age of 30 instead of the age of 21, we wouldn't probably be having this conversation."

LaTroy Hawkins, a veteran Major League Baseball pitcher who is now with the Toronto Blue Jays, says kids should understand that "the money you're making now, if you make enough of it, that should last you the rest of your life. Kids don't think like that."

Taking it all in was Christian Covington, a former defensive tackle at Rice University, who was just drafted this year by the Houston Texans.

According to league statistics, the average career in the NFL is a little more than three years; Major League Baseball, about five. The NBA is right in the middle.

But planning for that kind of early, early retirement isn't on most rookies' minds.

"You want to spend YOUR money the way YOU want to spend your money," said former high school phenom Kenny Anderson. He was the youngest player in the league when he signed with the New Jersey nets back in 1991. Over the next 14 seasons he earned around $60 million. But now, nearly all of that is gone.

When he made it, his family felt they'd made it, too. And for Kenny, a sense of obligation kicked in.

The first thing he bought as a rookie? A house for his mom. Then he started writing checks to his siblings. "I'm giving my sisters and my brothers allowance, you know? They're grown people. Allowance? You know what I mean?"

"How much of an allowance?" asked Cowan.

His talent, and his salary, made him quite the catch -- and that cost him, too.

"I got eight kids, you know, two divorces, this is my third wife. So a lot of this stuff I did it to myself, far as with my money," Anderson said.

"Some people call it the lottery effect -- they've won the lottery," said Len Middleton, a professor at the Ross School of Business at the University of Michigan. He says a common thread among these athletes is a lack of knowledge: "It's not rocket science; it's not hard to learn. It's just being exposed to it."

So he started a business course tailored for future pro athletes, although any student can enroll.

"They have a choice right now. They're at these crossroads, right? And if they gain this knowledge, they're going to be far better off down the road," Middleton said.

Subtract the hefty savings needed for a retirement that could start in their late 20s -- and the pot gets a lot smaller.

As Middleton subtracts basic living expenses, it gets worse: "This is what you have left -- $50,000," he said. "Now you see why these guys go broke."

"I was in shock," said Glenn Robinson. "Like, I almost walked out of the class crying. I was like, 'Where did it go?'"

Robinson took Middleton's course, and headed into the NBA with eyes wide open. "There's some guys in the league that don't even know the PIN to their own bank account," Robinson said. "They just expect for the people that's handling their money to be able to keep track of that. And they trust them."

"Why don't you think more colleges aren't doing classes like this?" Cowan asked.

"That's a great question. I have no idea."

Hockey star Zach Nagelvoort isn't taking any chances. After being drafted by the Edmonton Oilers, he, too, enrolled in the course. Now after working on his fancy footwork at the gym, he goes home to study good financial footing, too.

Cowan asked, "How big a difference do you think this has made?"

"Come back in five years and let's see how helpful it is!" he laughed.

Kenny Anderson had the drive to fight back from his financial defeat. He now gives money pointers to young athletes as often as showing off his three-pointers.

"My family's fine. My bills are paid. My house is paid off, I don't have a mortgage, so you know, I'm fine," he said.

Keith McCants had a tougher road. He got addicted to painkillers, even became homeless for a while -- his glory days in football a distant memory. But he found a way to get rich in other ways. He now counsels those struggling with addictions just like his.

For McCants, that kind of wealth is the kind that really lasts. "The love of money is the root of all evil," he said. "And the world loves money. It makes the world go round. It's what you DO with it that defines who you are."