Were you told as a child to "eat your vegetables"? Some kids grow up to disregard that advice. But there are others who take it to heart … and then some. Our Cover Story is reported by Tracy Smith:

The backyard barbeque … the Thanksgiving turkey … the hot dog in the bleachers … great flocks of chickens, acres of hogs and herds of beef cattle moving across an open range.

Americans love the steak house, the chicken shack, the big burger, and bringing home the bacon.

Americans lead the world in meat consumption. It's an irreplaceable part of our diet … or at least it used to be.

It's dinner time at Engine Company 2 in Austin, Texas. On the menu tonight: enchiladas, Thai curry, meat loaf … a big meal, sure, and not a molecule of meat in any of it.

"I know it does," firefighter Rip Esselstyn said, "but this is made from oats, black beans, celery."

When they're on duty, the firefighters of Engine 2 consume a plant-based diet. They eat nothing, as they say, with a face or a mother … or anything that comes from an animal, like eggs or milk.

And that doesn't mean boring or bland.

For a crew used to pot roast and fried eggs, the all-veggie meals took some getting used to. Some even wondered if a meat-free diet would leave them too weak to do their jobs.

They needn't have worried, as their exercises demonstrated.

Rip Esselstyn started his buddies down the road to meatless living back in 2003, when one of the guys found out his cholesterol level was dangerously high.

"So did you all kind of make a pact saying, 'We're gonna eat better, we're gonna cut out meat'?" Smith asked.

"We started out with lunches," said Esselstyn. "And then it progressed to lunches and dinners, and breakfasts. And then it was just full bore."

They all lost weight … and saw their cholesterol drop dramatically.

Now, the meals at Engine 2 are mostly meat-free.

"Surprisingly, I thought it'd be the steaks I'd miss," she said. "I want me some fried chicken!"

"I have been known to cheat," he said, "but my dad had quintuple bypass surgery two years ago, and my grandfather had quadruple, so I'm in line. I have the genetics."

Whatever your reason, a vegetarian lifestyle is still unusual: A 2006 Harris poll found fewer than 3 percent of Americans considered themselves vegetarian, but the number is growing.

"I think the image of vegetarians in the 19th and 20th centuries was 'fringe kooks,'" said food historian Andrew F. Smith. "Americans ate meat. We were of English derivation and by gosh, we ate beef and we ate pork and we ate lamb and we ate everything else we could get our hands on.

"I think throughout much of American history this was the case," he said. "It's only in the last 30 years that vegetarianism has come into the mainstream."

Rip Esselstyn himself is a former meat eater and a champion triathlete who says he feels better competing as a vegetarian.

"Every once in a while, I'll get a whiff of barbeque, you know, of a cheeseburger, something like that, and it takes me back. And I'm like, 'Ooh, yeah, that smells good!' But I can leave it at that. I have no problems leaving it right there."

That may have been a very wise move: According to a 2007 study in the New England Journal of Medicine, heart disease actually kills more firefighters than fire itself.

Esselstyn put the station's diet and exercise regimen into a book, appropriately titled "The Engine 2 Diet" (Grand Central Publishing). Besides no meat, it also means little or no dairy, no fats and no oils … no kidding.

"Do you honestly think that every American could eat this way?" Smith.

"I don't think, I know every American could," Esselstyn said. "Now, it's a matter of how do we get them to do that. I think in less than five years, there will be such a stigma attached to eating meat and dairy, that it will be similar to smoking cigarettes today."

"In less than five years? If you want to eat your cheeseburger, go outside?" Smith said.

"You want to go eat a cheeseburger, then you need to go to a special room, where people are eating cheeseburgers," he said. "Wouldn't that be great?"

(CBS)
"As a meat eater, I think not so great," said Nancy Rodriquez (left), a Connecticut nutritionist whose research has been funded by the beef industry.

"I think that if you made a conscious decision to cut out meat, that you run the risk of having a diet that isn't going to be adequate in a number of nutrients," she told Smith. "One of the most important ones is iron, for example, and the fact that the form of iron that you find in eggs or meat or chicken, for example, is more readily absorbed and thought to be a better type of iron that you'll find in vegetables."

"The food triangle is laden with foods that are going to guarantee that millions of Americans are going to perish," said Dr. Esselstyn, who's affiliated with the Cleveland Clinic. He says heart disease is practically a given for everyone who eats what Americans like to eat.

"The disease is ubiquitous; everybody has it," he said.

"So you're saying I have it, anyone whose eating the American diet?" Smith asked.

"If you were to suddenly die and you were autopsied, yes, you'd find the disease."

"All of us who are eating the typical Western diet, and that's been proved by study after study," Dr. Esselstyn said, "but you were startled by it, because no one's ever shared that with you. That's not information that we get to the general public." 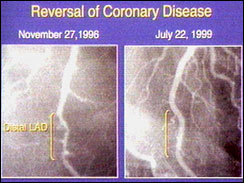 (CBS)
Dr. Esselstyn's 12-year study found that a low-fat vegetarian diet, combined with medication, gave heart patients lower cholesterol and clearer arteries. Take a look at these angiograms: on the left, a withered, dying artery of someone on a high fat diet; on the right, the same artery - looking good as new - after 32 months on Esselstyn's all-vegetarian program.

"Simply losing weight for the majority of individuals is associated with a reduction in cholesterol," she said.

"That's all it takes, is losing weight, not giving up [meat]?" Smith asked.

Still, Dr. Esselstyn's research was enough to convince the whole Esselstyn clan to give up meat ... even Ann Crile Esselstyn, Rip's mom.

The family eats kale … a lot of kale. She called it "spinach with heft."

"That was kind of like a little rap there!" Smith said.

"Not sure if it makes me salivate, but it has a ring to it," Smith said.

But why prolong your life if you can't enjoy it?

"Those other types of pleasure that come from enjoying good quality proteins, whether you're roasting a turkey or a piece of beef, I think it would be sad to deprive ourselves of some of those things," said nutritionist Rodriguez.

Firefighter Rip Esselstyn said he hopes people will at least try eating less meat ... even if they can't go cold-turkey.

"I know that's not a reality for a lot of people," he said, "so you really need to minimize it."