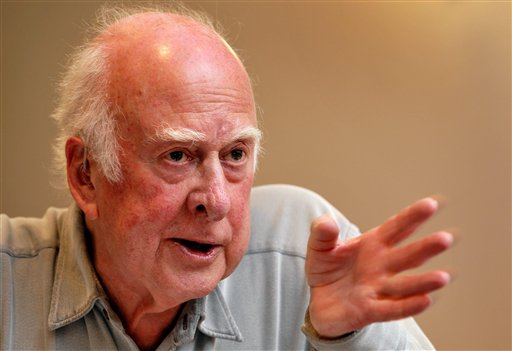 The father of a theoretical subatomic particle dubbed "the God particle" says he's almost sure it will be confirmed in the next year in a race between powerful research equipment in the United States and Europe.

British physicist Peter Higgs, who more than 40 years ago postulated the existence of the particle in the makeup of the atom, said is visit to a new accelerator in Geneva last weekend encouraged him that the Higgs boson will soon be seen.

The $2 billion Large Hadron Collider, under construction since 2003, is expected to start operating by June at the European Laboratory for Particle Physics (known as CERN).

It likely will take several months before the hundreds of scientists from around the world are ready to start smashing together protons to study their composition.

Higgs said Monday the particle may already have been created at the rival Fermi National Accelerator Laboratory outside Chicago, where the Tevatron is currently the world's most powerful particle accelerator.

"The Tevatron has plenty of energy to do it," Higgs said. "It's just the difficulty of analyzing the data which prevents you from knowing quickly what's hiding in the data."

The massive new CERN collider, which has been installed in a 17-mile circular tunnel under the Swiss-French border, will be more powerful still and will be better able to show what particles are created in the collisions of beams of protons traveling at the speed of light.

The new Geneva collider will re-create the rapidly changing conditions in the universe a split second after the Big Bang. It will be the closest that scientists have come to the event that they theorize was the beginning of the universe. They hope the new equipment will enable them to study particles and forces yet unobserved.

But Fermilab still has time to be first if it can show that it has discovered the Higgs boson, Higgs said.

Nobel laureate Leon Lederman has dubbed the theoretical boson "the God particle" because its discovery could unify understanding of particle physics and help humans "know the mind of God."

Higgs told reporters he is hoping to receive confirmation of his theory by the time he turns 80 in May 2009.

If not, he added, "I'll just have to ask my GP to keep me alive a bit longer," referring to his general practitioner, not the God particle, a term he does not embrace because he fears it might offend some people.

Higgs predicted the existence of the boson while working at the University of Edinburgh to explain how atoms _ and the objects they make up _ have weight.

Without the particle, the basic physics theory _ the "standard model" _ lacks a crucial element, because it fails to explain how other subatomic particles _ such as quarks and electrons _ have mass.

The Higgs theory is that the bosons create a field through which the other particles pass.

The particles that encounter difficulty going through the field as though they are passing through molasses pick up more inertia, and mass. Those that pass through more easily are lighter.

Higgs said he would be "very, very puzzled" if the particle is never found because he cannot image what else could explain how particles get mass.

Higgs said initial reaction to his ideas in the early 1960s was skeptical.

"My colleagues thought I was a bit of an idiot," he said, noting that his initial paper explaining how his theory worked was rejected by an editor at CERN.

He said a colleague spent the summer at CERN right after he did his work on the theory.

"He came back and said, 'At CERN they didn't see that what you were talking about had much to do with particle physics.'

"I then added on some additional paragraphs and sent it off across the Atlantic to Physical Review Letters, who accepted it. The mention of what became known as the Higgs boson was part of the extra which was added on."