With matters of faith there's always plenty left open to interpretation. There may be no scientific way to characterize something as deeply personal as religious belief in this country. Still, this weekend's Parade Magazine tries to do that in a new survey. Martha Teichner looks at the findings, and some surprising perspectives, in our Cover Story:

For Garrett Sarley, yoga was the answer . . . a way to intensify how he felt his spirituality, emotionally and physically, not just intellectually.

Yoga gave him that. Going to church did not.

"I think I had the sense that there was a reality beyond the reality I was just participating in," Sarley said.

Sarley grew up Episcopalian, then was drawn to Catholicism. He loved the ritual, the repetition.

"The chanting of the rosary beads was very calming to me and very important in some way," he said.

But it was not enough.

"I kept searching," he said. "It's like searching for water. Once you taste it, you know, you can sort of smell it on a spring day."

Today Sarley is CEO of Kripalu, a huge yoga center, near water, in the beautiful hills of Western Massachusetts.

Every year, 30,000 people come here, many for extended retreats.

The Jesuit seminary once on this site closed. That fact alone illustrates the central finding of a survey, published today in Parade Magazine, that the religious landscape in the United States is changing.

The poll, conducted online, showed that nearly a quarter of respondents now say they are spiritual but not religious.

Nearly 7 out of 10 say they believe in God, and more than three-quarters pray. But half rarely, if ever, attend religious services.

"I think people start to look for, 'How do I produce the experience that I want from my religion, without having to adopt the beliefs that don't seem to match, or don't seem relevant, or don't even seem consonant or resonant with how I'm living my life,'" Sarley said. "That's why the Eastern techniques, particularly things like yoga, there's . . . you don't have to believe anything in yoga."

While we are still among the most religious nations in the Western world, the Parade Magazine poll shows barely half of respondents practice the religion with which they grew up. Americans, it seems, have a tendency to customize belief.

Randall Balmer, a professor of American religious history at Barnard College in New York City, and an Episcopal priest, described a composite character he had in mind: "A good, say, Presbyterian, and yet does tai chi in the park on Sunday Morning, consults the astrological tables in the newspaper and does yoga when she comes home from work at night, and sees no sense of contradiction among these various sorts of activities.

If that all sounds very "New Age-y," consider this: the term "New Age," in fact, was used in the mid-1800s by followers of a Swedish mystic named Emanuel Swedenborg. To this day, there's a Swedenborgian Christian church in New York City.

"And the first minister at this church, upon the building's completion, was a Swedenborgian and spiritualist named George Bush," said Mitch Horowitz.

"Swedenborg would be the kind of figure that today we would call a channel medium," said Horowitz, author of a new history of the occult in the United States. "He reported channel-traveling to other realms, the afterlife, other dimensions, even other planets, and speaking with beings who occupied this other world."

In other words, what we would consider the occult was employed in the name of religion, a widespread and very American phenomenon according to Horowitz.

"Most people would never even use the word, and yet, occult ideas have provided the software for most of our self-help and therapeutic religious philosophies," he said. "They don't think of themselves as New Age and certainly not as occult, but they may be participating in things - like meditation, or positive thinking philosophies or some kind of mind/body healing - that at one time was very esoteric, and has today become very mainstream."

From Norman Vincent Peale's "The Power of Positive Thinking," to Christian Science, deep down there's a connection to the occult, says Horowitz.

For a while in the 1870s the center of the occult universe was a New York City apartment building, at the corner of 8th Avenue and 47th street, in what's now an Econo-Lodge. 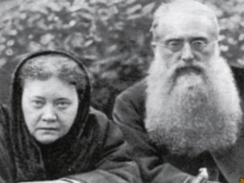 (CBS)
It was home to the founders of the Theosophy Movement. Madame Blavatsky was a flamboyant Russian émigré; Colonel Henry Steel Olcott, a respected military man, was appointed to investigate President Lincoln's assassination.

Their exotic salon was frequented by famous patrons, including Thomas Edison.

"Edison spoke very forthrightly to them about his desire to create some kind of a machine or instrument that could measure for ethereal beings or ghosts or beings from the afterlife," said Horowitz.

Yes, just like in the film "Ghostbusters." But theosophy wasn't that goofy. It still exists, by the way. We interviewed Horowitz at the Theosophical Society Library in New York.

He says early Theosophists were just ahead of their time.

"Theosophy pioneered the idea in the United States, and then later throughout the world, that all religions, all the historic faiths, had universal truth to them," he said.

According to the Parade Magazine poll, nearly 6 out of ten respondents believe that all religions have validity, and nearly 2/3 expect to connect with dead loved ones when they themselves die.

So the fact that seances were held in the White House after the Lincolns lost two of their sons doesn't seem quite so bizarre, or that the ouija board Parker Brothers sells as a toy was the patented version of home-made "talking boards" which 19th century spiritualists used, supposedly to contact the beyond.

The online Parade Magazine poll found that nearly 1 in 5 respondents claim they've actually had contact with the dead. 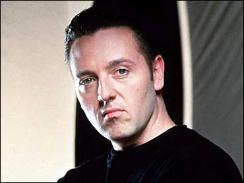 (SCI-FI CHANNEL)
It should come as no surprise then that just about that same number, one in five of those polled, watches someone like John Edward on television.

Edward (left) is a psychic/medium who sees no conflict between his own Catholic upbringing and what he calls his gift, even if, in this century, the church does.

"I couldn't understand why the church wouldn't say it's okay to help a parent who's lost a child, and to show that there is something else and that there is a heaven," Edward told Teichner. "It only reinforced what I was taught."

In fact, Edward has written a book about prayer and is a big believer in reciting the rosary, but feels disillusioned by formal religion.

"Major organized religion has failed people by not becoming more open to the reality of things, and trying to hold tight to the dogma of fire and brimstone and control and fear," he said. "That's going to be the downfall of the church."

Carlene Bauer was deeply unhappy in the Evangelical churches of her childhood.

"You got the sense that anything that didn't have anything to do with church was bad and would corrupt you, and I knew that wasn't Jesus as much as it was the churches I had grown up in," Bauer said.

She became a Catholic, but then, after 9/11, left the Catholic Church, too.

"When you grow up thinking that God is the cause of nearly everything, it's hard to think how could He let this happen.

"I'm not listening to God anymore," she told Teichner. "I'm not going to pretend that He cares what I do. I'm not going to ask Him for help. I'm not sitting in church anymore. It's OK if I walk away. I tried really hard for a really long time.

"It sounds like somebody got jilted, actually," she laughed.

Bauer has written a memoir of her break with God which, listening to her, it's clear was agonizing.

Her pain is buried in another poll statistic: More than one out every four respondents practice no religion at all.

If she is the face of religion lost, Rabbi Sigal Brier is the opposite, of religion found - by way of yoga.

She was born in Israel and is now an American citizen. Growing up, her Judaism was more a fact of life than the calling yoga became.

"Yoga opened my heart, kept me in my body, and allowed my soul to do the dance it needed to find Judaism," Brier said.

Instead of leading her away from her traditional faith, yoga is how she happened to become a rabbi.

"I was able to bring the light, the fire of the practices of yoga to shine upon Judaism, and Judaism came to life," she said.

"Part of my work, that I created, is moving through prayer," she said. "I combined liturgy, prayers from the Jewish tradition with music, and with yoga flows. That is a very powerful experience."

There is little in the Parade Magazine poll to describe people like Rabbi Brier. This statistic, maybe: Six out of 10 respondents still say religion is an important part of their lives, but it's only a number and cannot begin to convey the enormity of what that really means. 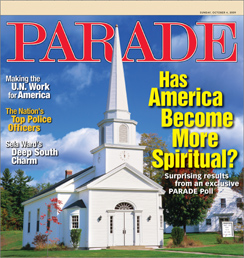