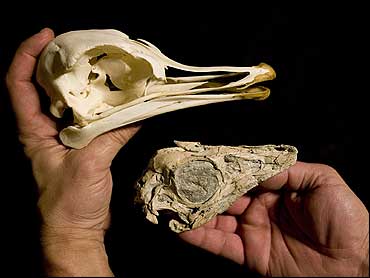 Left on their own by adults, the young dinosaurs sank into the mud beside a lake and died 90 million years ago in what would become the Gobi Desert.

The well-preserved fossils, excavated by a team of Chinese and American scientists, offer a rare bounty of clues about how this herd of ostrich-like sinornithomimus lived - and died.

Two life-sized models of the sinornithomimus were put on public display for the first time Monday in Hohhot, capital of north China's Inner Mongolia region.

"This is a very exciting discovery, because 99.9 percent of the time, we find a group of skeletons that died at different periods due to unknown causes," said Paul Sereno, a University of Chicago professor on the excavation team. "The other 0.1 percent of the time, scientists consider themselves lucky to find small herds that have been well-preserved after floods or volcanic eruptions, similar to that of Pompeii."

Italy's famous city of Pompeii was buried - its way of life frozen in time in the volcanic eruption of Mount Vesuvius in A.D. 79.

Sereno, a paleontologist, helped lead the 2001 expedition that uncovered the fossilized remains of the 25 young sinornithomimus near Suhongtu, a tiny, remote village in the Gobi desert about 370 miles west of Hohhot.

The position of the dinosaur bones suggests they were looking for water on the edge of a lake, got stuck and died as the mud engulfed them, Sereno said in a telephone interview. Their hip bones were found at odd angles, indicating scavengers tugged at their carcasses. Crablike organisms were also found surrounding the skeletons, a clue that tells scientists they were covered in water shortly after death, which helped preserve them.

Tan Xinwei, a paleontologist from the Inner Mongolia Department of Land and Resources who also worked on the expedition, said the findings tell researchers that "the youngsters were left to fend for themselves while the adults were preoccupied" with hatching eggs or building nests.

The two-legged, feathered dinosaurs reached about 4 feet (1.2 meters) tall as adults and scavenged for small plants by jutting out their long necks in an ostrich-like fashion, Sereno said.

Xu Xing, a professor at the Institute of Vertebrate Paleontology and Paleoanthropology in Beijing, called the findings "an important discovery" that could only have happened under a unique set of circumstances.

"Without the correct environmental conditions, these fossils would not have been found in nearly pristine condition - uncrushed or worn down," said Xu, who was not involved with the project.

The bones were spotted in 1978 by a Chinese geologist and first excavated by a Sino-Japanese team some 20 years later. That team named the dinosaurs sinornithomimus, or "Chinese bird mimic."

It wasn't until 2001 that researchers were able to unearth all 25 skeletons and examine their findings.

The sinornithomimus skeletons were brought to the University of Chicago for research and preservation but will return to China by the end of the year.

The 10-member expedition and research team included scientists from the University of Chicago, the Chinese Academy of Sciences, Montana State University, the University of Michigan and Inner Mongolia's Department of Land and Resources. It was financed by the National Geographic Society.