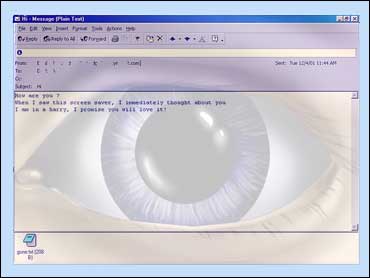 Google Inc. hails its new e-mail service as a breakthrough in online communication, but consumer watchdogs are attacking it as a creepy invasion of privacy that threatens to set a troubling precedent.

Although Google's free "Gmail" service isn't even available yet, critics already are pressuring the popular search engine maker to drop its plans to electronically scan e-mail content so it can distribute relevant ads alongside incoming messages.

Privacy activists worry that Gmail will comb through e-mail more intensively than the filters widely used to weed out potential viruses and spam.

Gmail opponents also want Google to revise a policy that entitles the company to retain copies of people's incoming and outgoing e-mail even after they close their accounts.

The e-mail scanning, which Google says will be handled exclusively by computers, has raised the most alarms, partly because it seeks to capitalize on messages sent by people without Gmail accounts.

Google intends to deliver ads by analyzing what's being discussed. For instance, an e-mail from one friend to another talking about an upcoming trip might include links to hotels or airlines.

Gmail has a "definite creepiness factor," said Ari Schwartz, associate director of the Center for Democracy and Technology.

Mountain View, Calif.-based Google portrays the commercialization of e-mail as a small trade-off for a service that will give each user one gigabyte of storage — up to 500 times more than other leading free services — and provide a quicker, cleaner way to search e-mailboxes. Most e-mail messages opened on Gmail won't even contain ads, according to Google.

"Consumers really need to look this gift horse in the mouth because it has rotten teeth and bad breath," said Beth Givens, director of the Privacy Rights Clearinghouse, a watchdog group.

"We are not going over to the dark side," said Wayne Rosing, Google's vice president of engineering. "Consumers can expect us to treat their e-mail as private and with a great deal of respect. I don't think we are doing anything unreasonable."

Gmail apparently doesn't bother everyone. Without providing specifics, Rosing said "hundreds of thousands" of people have registered with Gmail.com since Google announced the service last week. The company is still testing Gmail before offering it to the general public later this year.

The enthusiastic response to Gmail probably is being driven by the chance to get so much e-mail storage space for free, said Chris Hoofnagle, associate director for the Electronic Privacy Information Center.

Hoofnagle estimates Google will pay about $10 annually for each gigabyte of storage the company gives away, a small price to build an audience likely to be prized by advertisers.

"It's not a great deal. Individuals would be throwing away the protections of their communications for a few dollars," Hoofnagle said. "We don't see this as any different than letting a company listen in on your phone conversations and letting the Postal Service open your mail."

Some parts of Gmail even could be illegal, said Simon Davies, director of Privacy International, a watchdog group in London.

Google's current Gmail policy advises potential users that "residual copies of e-mail may remain on our systems, even after you have deleted them from your mailbox or after the termination of your account."

Vast data collection like that appears to be a blatant violation of communication protections in United Kingdom and possibly elsewhere in Europe, Davies said. Privacy International already has filed a complaint against Gmail with United Kingdom regulators.

"If millions of people have their communication history kept on Google computers," Davies said, "then that storehouse becomes a very valuable source of information for a range of unintended consequences."

The watchdogs also worry that Gmail could give Google a way to individually identify the people using its search engine, placing a name with the material being sought.

Google already tracks most searches conducted at its site by tagging users' Web browsers with a chunk of data known as a "cookie." Google users are able to remove or block the cookie, although few do.

Rosing said there will be an information firewall separating Google's search engine from Gmail.

"We don't use the data collected on one service," he said, "to enhance another."