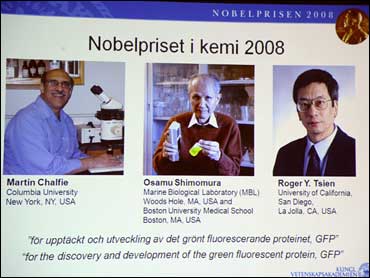 Two Americans and a U.S.-based Japanese scientist won the Nobel Prize in chemistry on Wednesday for discovering and developing a glowing jellyfish protein that revolutionized the ability to study disease and normal development in living organisms.

Japan's Osamu Shimomura and Americans Martin Chalfie and Roger Tsien shared the prize for their work on green fluorescent protein, or GFP, the Royal Swedish Academy of Sciences said.

Researchers worldwide now use GFP to track such processes as the development of brain cells, the growth of tumors and the spread of cancer cells. It has let them study nerve cell damage from Alzheimer's disease and see how insulin-producing beta cells arise in the pancreas of a growing embryo, for example.

The academy compared the impact of GFP on science to the invention of the microscope. For the past decade, the academy said, the protein has been "a guiding star for biochemists, biologists, medical scientists and other researchers."

When exposed to ultraviolet light, the protein glows green. So it can act as a tracer to expose the movements of other, invisible proteins it is attached to as they go about their business. It can also be used to mark particular cells in a tissue and show when and where particular genes turn on and off.

Tsien developed GFP-like proteins that produced a variety of colors so that multiple proteins or cells can be followed simultaneously.

"In one spectacular experiment, researchers succeeded in tagging different nerve cells in the brain of a mouse with a kaleidoscope of colors," the Nobel citation said. The experiment was called the "brainbow."

Shimomura and a colleague found GFP in material they extracted from about 10,000 jellyfish they had recovered off the coast of the state of Washington. They reported in 1962 that it glowed bright green under ultraviolet light.

Some 30 years later, Chalfie showed that the GFP gene could make individual nerve cells in a tiny worm glow bright green. Tsien later extended the scientific palette to a variety of colors.

"This is a technology that has literally transformed medical research," said Dr. John Frangioni, an associate professor of medicine and radiology at Harvard Medical School. "For the first time, scientists could study both genes and proteins in living cells and in living animals."

The trio will split the 10 million kronor (US$1.4 million) award.

Chalfie said he slept through the Nobel committee's phone calls early Wednesday and only found out about the prize when he checked the Nobel Web site to see who had won.

Speaking to reporters by telephone from California, Tsien said he was surprised to receive the award.

"There had been some rumors, but from sources whose reliability was questionable," he said.

In a news release issued by his university, Tsien said he had set his sights on imaging and treating cancer.

"I've always wanted to do something clinically relevant in my career, if possible, and cancer is the ultimate challenge," he said.

Gunnar von Heijne, the chairman of the chemistry prize committee, demonstrated the award-winning research to reporters by shining ultraviolet light on a tube with E. coli bacteria containing GFP. The tube glowed in a green fluorescent light.

The winners of the Nobel Prizes in medicine and physics were presented earlier this week. The prizes for literature, peace and economics are due to be announced Thursday, Friday and Monday.

The awards include the money, a diploma and an invitation to the prize ceremonies in Stockholm and Oslo on Dec. 10, the anniversary of prize founder Alfred Nobel's death in 1896.

Last year's chemistry award went to Gerhard Ertl of Germany for studies of chemical reactions on solid surfaces, which are key to understanding such questions as why the ozone layer is thinning.