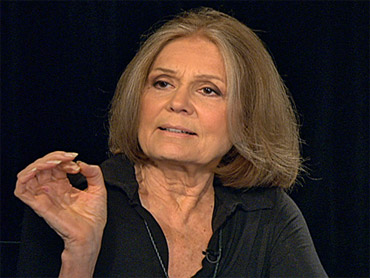 Feminist leader Gloria Steinem told CBS News anchor Katie Couric that while female Republican politicians may not support policies that advance women's rights, "they have an absolute right to be wrong."

"I defend their right to be wrong," the writer and activist said in an interview for @katiecouric (Watch a clip of her remarks in the video to the left). "But the reason they are being put forward is that the women's movement has been so successful."

While women remain underrepresented in government, there are a number of female candidates in this year's midterm elections, particularly a number of high-profile female Republican candidates. Candidates like California Senate candidate Carly Fiorina and South Carolina gubernatorial candidate Nikki Haley are helping the GOP catch up to the Democratic Party, to which most female politicians still belong.

"The Republican Party saw how well Hillary Clinton did and is now fielding female candidates," Steinem said. "But the good news is, this is an electoral process, and people are smart, and they can look at the issues and understand."

Steinem made the point that policies beyond abortion rights can impact women. She said Fiorina's position on taxes would deprive women of child care, for instance, and that voters will take note of those issues.

"Just as more men than women supported Sarah Palin the last time, I suspect it may happen again," she said.