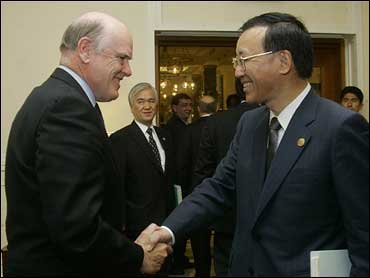 Finance ministers from the Group of Eight leading industrialized nations said in a draft communique Saturday that global economic growth is strong, but warned of dangers posed by high energy prices and global imbalances.

"Global growth remains strong and is gradually becoming more broadly based," said the ministers, who met in St. Petersburg in the run-up to next month's summit of the G-8 leaders. "However, downside risks from high and volatile energy prices and widening global imbalances remain."

The ministers called for promoting greater transparency and reliability in energy market data through developing a global common standard for reporting oil reserves.

Finance ministers had been expected to discuss how the United States is dealing with its huge trade deficit and what policies other countries are pursuing to bolster domestic growth as a way of supporting U.S. exports. Without referring directly to the United States, the draft called the task of addressing economic imbalances a "shared responsibility."

The U.S. Commerce Department said Friday that the trade deficit rose to $63.4 billion in April after two months of rare declines, pushed higher by surging oil prices and a flood of imported furniture, televisions and toys from China.

In the face of calls in Europe to diversify energy supplies away from a strong reliance on Russia, which currently supplies a quarter of European energy, Russia has insisted that predictable markets for its oil and gas are a key part of energy security. The draft appeared to acknowledge both positions.

"We recognize the importance of ... diversification of energy markets and supply sources and of strengthened emergency response cooperation in ensuring energy security," the draft said.

The ministers also drafted a separate statement focusing on the need to support impoverished nations' access to energy supplies.

"We urge national governments and multilateral and bilateral donors to integrate energy issues into poverty reduction and country assistance strategies, including options for the least developed countries to tap their natural resources potential," they said.

On the eve of the ministers' meeting, Russia announced a plan to write off about $700 million in debt owed by the world's poorest countries.

Russia's Finance Minister Alexei Kudrin said that Russia also had reached an agreement with the World Bank to require debtor countries to use $250 million of the $700 million to combat infectious diseases, primarily malaria, and help improve energy infrastructure in African nations.

Russia, which is leading the G-8 for the first time, is keen to flex financial muscles that have been buffed by billions of dollars in oil money flowing into its coffers at a time of record world prices. It is the world's second largest oil exporter after Saudi Arabia.