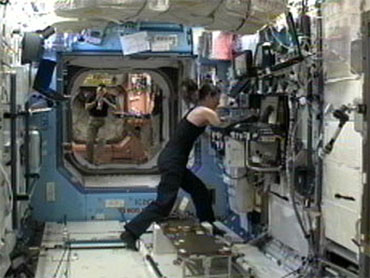 An American astronaut and two Russian cosmonauts, whose return to Earth from the International Space Station was pushed back by a day because of problems encountered while undocking, may finally be underway later today.

Installation of electrical jumpers that mimic an expected-but-absent "hatch locked" signal in the docking mechanism of the space station's Poisk module appears to have resolved a glitch that prevented three crew members from undocking and landing early Friday, officials said.

"They were never in any danger," CBS News space analyst Bill Harwood said on "The Early Show". He added, however, that with one of the Soyuz capsules docked at the ISS out of order, the total station crew of six could face problems if an emergency were to arise.

The capsules are used as escape pods, and with only one in use, three people would be unable to leave the station in the event of a catastrophe, explains Harwood.

A preliminary timeline calls for the departing crew to re-enter the Soyuz TMA-18 spacecraft and close its main hatch around 6:45 p.m. EDT, setting up a second attempt to undock from the Poisk module around 10:02 p.m. If all goes well, Skvortsov will oversee a four-minute 21-second de-orbit rocket firing around 12:32 a.m. Saturday, setting up a landing in Kazakhstan around 1:21 a.m.

Wrapping up a six-month stay in space, Skvortsov, Kornienko and Caldwell Dyson had hoped to undock Thursday evening for an early Friday touchdown, but they ran into problems when closing the hatches between the Soyuz spacecraft and its docking port atop the Poisk module.

Telemetry indicated the hatch was closed, but an expected signal showing it was firmly locked was absent. The Soyuz hatch was re-opened and inspected and then resealed as was a cover on the station side of the interface. But again, flight controllers did not see a locked indication. With air pressure holding steady, the crew carried out an extended leak check to verify the integrity of the seals.

Flight controllers then attempted to drive open hooks in the Poisk side of the docking interface that help hold visiting spacecraft in place. The hooks failed to retract. Skvortsov attempted to open the hooks by sending commands from inside the Soyuz but again, the hooks refused to budge.

With time running out, Russian flight controllers were forced to delay undocking pending additional troubleshooting. They eventually decided to delay the departure a full day.

Inspecting the Poisk side of the hatch, station flight engineer Fyodor Yurchikhin found a small, apparently damaged seven-toothed sprocket floating in the docking mechanism when he removed a protective cover for an inspection. The dislodged sprocket may have prevented the hatch lock sensor from working properly.

To work around the problem, Yurchikhin installed electrical jumpers that sent the proper signals to the docking system indicating a firmly-closed hatch. The hooks then retracted normally.

A NASA spokesman said the jumper cables will remain in place until a Soyuz carrying three fresh crew members arrives for a docking at the Poisk module on Oct. 9. It is not yet clear whether the mechanism will be repaired or whether permanent jumpers will be installed.

But with the temporary jumpers in place, engineers believe the arriving Soyuz will have no problems linking up with the space station.

Friday's incident was the second problem in three months with docking or undocking Russian craft at the space station.

In July, an unmanned Progress supply ship failed to dock because of the activation of a transmitter for the manual rendezvous system, which overrode the automated system.

After the failed docking, it was moved to about 180 miles from the station. A second docking attempt succeeded two days later.