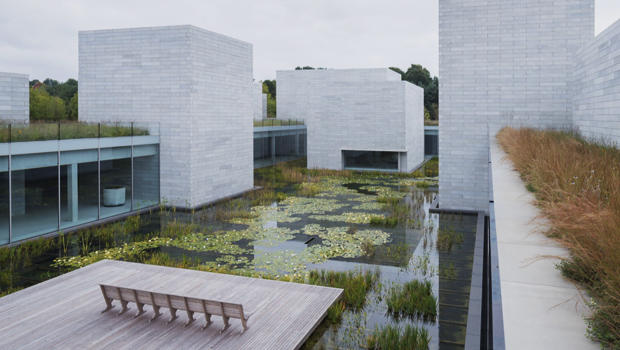 Washington, D.C., is jam-packed with museums, but the must-see art collection in the region right now is 20 miles from the Mall, in Potomac, Maryland: Glenstone, where ultra-modern galleries and giant sculptures by the likes of Jeff Koons and Richard Serra play peekaboo with their surroundings.

Mitch and Emily Rales built Glenstone on a 230-acre site to share their extraordinary collection of modern and contemporary art. But they wanted to make this a different kind of museum – a blend of art, architecture and nature. "The landscape is meant to loosen you up and let your mind start to wander," said Mitch.

"It's not just about the objects that you see; it's truly an experience," added Emily.

Their collection includes some 1,300 works, starting with mid-century greats like Louise Bourgeois, Jackson Pollock, Mark Rothko and Andy Warhol, and moving on to later works by artists like Jean-Michel Basquiat.

It all began in 1998, when tech billionaire Mitch Rales, who is now 62, had a near-death experience: "I was in a pretty traumatic accident in Russia. Everything I had possession-wise blew up in the helicopter. And I came back a different person. I basically decided that I was going to change the course of my life."

Seven years later, in New York, Rales (who was divorced) met Emily Wei, a young and influential curator 20 years his junior. She agreed to help him launch Glenstone.

It was love at first sight; they were married in 2008, and Emily Rales helped interest her husband in a new generation of artists.

One chamber was specifically designed to hold a mammoth and mysterious work by Robert Gober.

"Here's this sort of eerie and slightly sinister feeling [of] being in a forest, but also in jail, surrounded by water that is probably not fit for drinking because there's rat bait everywhere," said Emily. "So it's this funny kind of sylvan and pastoral, but also very constructed environment."

Another room is composed entirely of works by L.A.-based artist Charles Ray. Each piece is a story in itself, including a stainless steel replica of a wrecked truck he pulled out of a junk yard.

Braver said, "I think a lot of people are going to look at something like this and say, 'Come on, is this art?'"

"That's what they said about the abstract expressionists," said Mitch. "Art history takes 30, 40, 50 years to really broadcast itself. We'll see."

Mitch and Emily Rales are making art history here. The museum was first opened on a very limited basis in 2006, but they have spent more than $200 million to enhance the experience.

Admission is free, but limited to 400 visitors a day. "We seek to give lots of space to our visitors, to really give them the time to explore and enjoy," said Mitch.

The Raleses live quietly right on this property. Though they are noted philanthropists in the art world, they have until now worked hard to stay out of the spotlight.  "I don't think we've been a private as people want to make us out to be," Mitch replied.

And how many TV interviews has he done? "This is the first, thank you very much," he said. "But we've been on a journey, and it took us 15 years to get to this point today."

And the Raleses have endowed Glenstone for what they hope is forever, seeking to create a lasting legacy.

Emily said, "What we're hearing day after day from these visitors is that a quiet place for contemplation of art and nature is exactly what they need. Their souls are hungry for it. And we hope that that's what we will continue to deliver to our visitors."