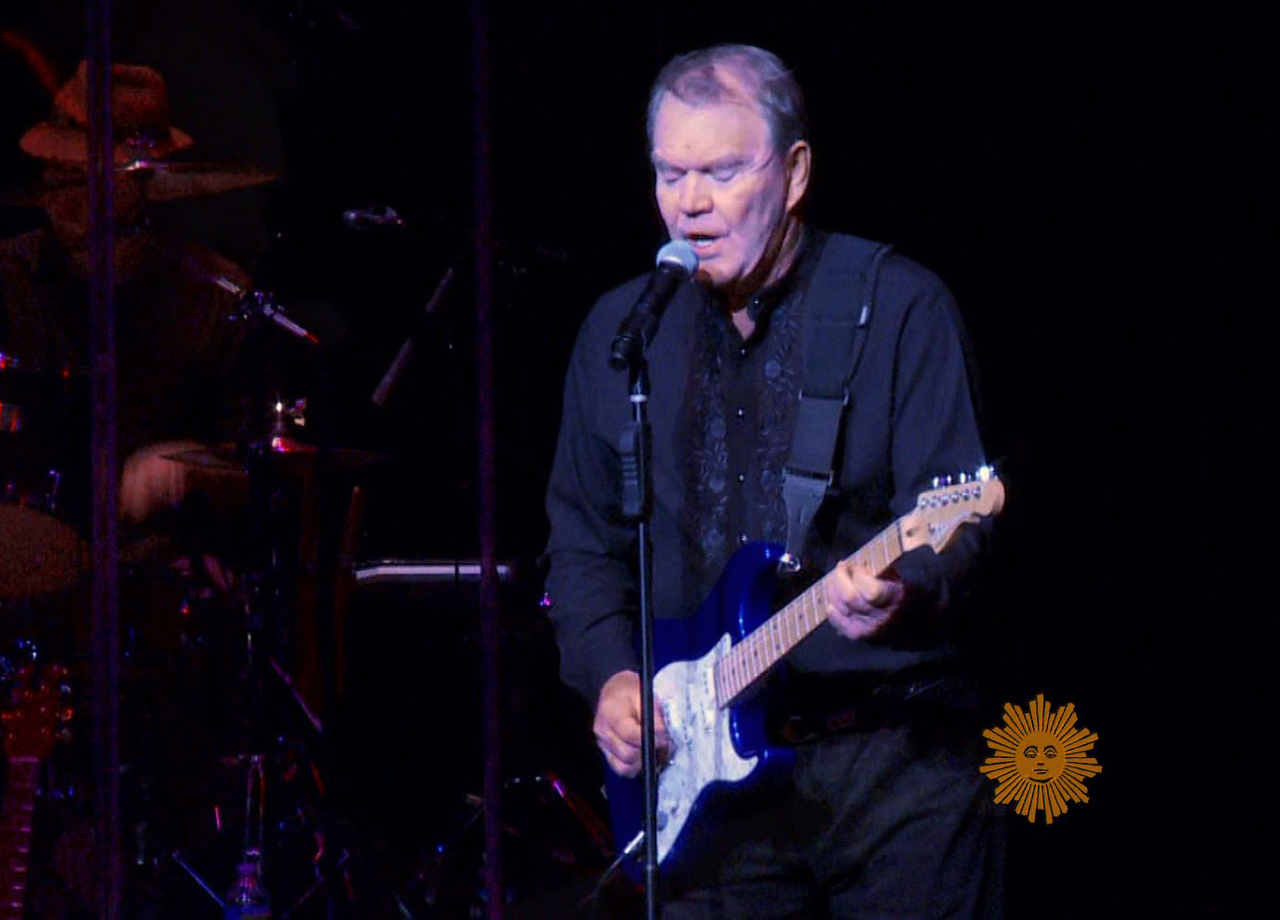 The legendary Glen Campbell will appear on tonight's Grammy Awards which air here on CBS. He'll be honored with a lifetime achievement award - his SIXTH Grammy - and he's currently on tour, a tour that's unfortunately scheduled to be his last. Anthony Mason went along to prepare this Sunday Profile (Originally broadcast on February 12, 2012):

His farewell tour has stretched on for six months across Europe, and now America.

On this night, the Rialto Square Theater, the jewel of Joliet, Illinois, is sold out.

Because Glen Campbell is here to say goodbye.

"It's knowing that your door is always open and your path is free to walk . . ."

Now 75, Campbell was diagnosed with Alzheimer's last year. So after 21 Top 40 hits and selling nearly 50 million records, the Rhinestone Cowboy is riding into the sunset.

His three youngest children have joined his backup band: Cal on drums, Shannon on guitar, and "his baby," 25-year-old daughter Ashley, who keeps a close watch on her father.

"I feel a little protective of him, you know? I just want to make sure if he needs anything from me, I'm there, and I'm paying attention," she said.

In Joliet, just after playing his hit, "Galveston," Campbell suddenly starts playing the song again. It's Ashley who gently has to remind him: "We just did that one, Dad."

Campbell quipped, "I ain't taught them how to follow me yet!"

She said she has been watching her father's changing condition "kind of creeping on for years now, since high school even."

"That's got to be tough to watch," said Mason.

"It is. It is tough. I was watching a YouTube video of him playing some amazing guitar solos, and I was just like, kind of miss that guy!'" Ashley said. "I mean, he's still here, but he was so much more on top of it."

With the help of a teleprompter, Campbell's slip-ups are rare - and he makes fun of them. "Always remember this, friends: If you do it perfect, they'll want it that way every time!"

But at home with his wife Kim, in Malibu, Calif., the subject of Alzheimer's is awkward because Campbell has to be reminded that he has the disease:

"You think we got that?" asked Glen.

Typical with Alzheimer's patients, Campbell struggles with the present.

He does better with the past.

One of 12 children of an Arkansas sharecropper, Glen first picked up a guitar at age 4. He was a natural.

By the early Sixties, he'd played his way to L.A. Though he couldn't read music, Campbell quickly became one of the most sought-after guitarists in the city, getting a lot of session work.

One of an elite group of studio musicians known as "The Wrecking Crew," in 1963 alone Campbell performed on nearly 600 cuts for other artists.

He played guitar for Frank Sinatra on "Strangers in the Night"; for the Monkees on "I'm a Believer"; and for the Beach Boys on many of their recordings.

And when Brian Wilson took time off from the band, Campbell filled in for 6 months.

"I had to go with them on a gig and play bass and sing his part: It's a little old lady from Pasadena."

"Did you like being a Beach Boy?" asked Mason.

Winning four Grammys that year, he was hailed as country music's first crossover star. He said he never thought of himself as a country singer. "No, I'm a singer, and I really like good songs," he said.

The hits kept coming, and the next year the Smothers Brothers asked him to host their summer replacement show on CBS. Everything changed after that. "Yeah, it did. I didn't realize the power of television," said Campbell.

"The Glen Campbell Goodtime Hour" ran for four years, and made him a household name.

Back stage after one show, the rising young star had a surprise visitor:

"Guy comes up and he says, 'Is Glen Campbell here?' It was John Wayne," Campbell calls. "And he had his little girl with him and she liked the 'Goodtime Hour.' That's how I got THAT gig, you know?"

"I looked so bad in it compared to John Wayne, he won the Oscar!"

Campbell's biggest hit was still to come. In 1975, he heard a demo that he thought could become his signature tune. He told Mason he knew right away he wanted to record it. "Oh yeah. 'I've been walking these streets so long singin' the same old song.' That was just perfect."

"Rhinestone Cowboy" was his first Number One record.

But Campbell soon entered a dark period that included a notorious cocaine-fueled affair with singer Tanya Tucker . . . a time he himself would call "runaway madness."

By the time Kim - then a dancer with the Rockettes - met him on a blind date in 1981, he'd had three marriages, five children, a coke habit, and a drinking problem.

"Why did you stick with it?" Mason asked her.

But after repeated relapses, Campbell finally quit the drugs and the booze. "I'm a jewel now," he said.

The singer sorts through it all on his new album, "Ghost on the Canvas," which will be his last.

The family said they felt they had to reveal that he had Alzheimer's. Ashley said she felt "relieved, because we were doing shows and he would mess up occasionally or seem confused, and people would think something else was wrong with him, something not good, like drugs or alcohol."

But he is only able to be on stage because Ashley and her brothers are behind him.

"What kind of help do you need to give him out there most?" Mason asked.

"He has some really good nights, it seems."

"Oh he's great, he's doing great," she said. "It's amazing. He still surprises me with phenomenal guitar licks, you know? Also, when I'm watching him on stage, I'm also just watching in amazement, you know?"

As the disease progresses, Glen Campbell's connection to the world will slowly fade.

But audiences are hoping he can keep the line open a little longer.

Jennifer Hudson on 2012 Grammys: Love was in the room

Bruce Springsteen, Paul McCartney behind the scenes at 2012 Grammys