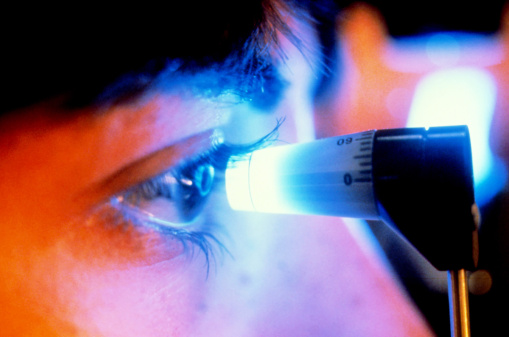 When Olivia Goree noticed something just "wasn't right" about her 6-week-old son's eyes, she trusted her instincts and took him to the doctor. What she never expected was the diagnosis: glaucoma.

"I was really surprised," recalled Goree, who said she had only ever heard of the vision-robbing disease affecting older adults.

And that's probably how most people think of glaucoma, since it's largely diagnosed in people older than 60. But rarely, the disease can strike infants and children.

Glaucoma refers to a group of eye diseases in which fluid builds up in the eye, creating pressure that damages the optic nerve and leads to vision loss.

In some cases, a baby will be born with glaucoma as part of a syndrome of birth defects, explained Dr. Robert Barnes, an ophthalmologist at Loyola University Medical Center in Maywood, Ill., who treated Goree's son, Christian.

In other cases, an older child develops glaucoma because of trauma to the eye, use of steroid eye drops, or surgery for a different eye condition, such as cataracts.

Christian's glaucoma, however, was present soon after birth and had no apparent cause. That's known as primary congenital glaucoma, and it affects about one in 10,000 infants born in the United States, according to the American Academy of Ophthalmology.

In a small percentage of babies with glaucoma, there's a family history of glaucoma at an early age, said Dr. Norman Medow, director of pediatric ophthalmology at Montefiore Medical Center in New York City.

Certain gene mutations have been linked to familial cases of congenital glaucoma, and children can be tested for them, Medow noted.

"But most often, it occurs as a sporadic case," he said. And in those cases, the underlying cause is unclear.

Barnes said Christian was lucky his mom noticed something amiss and acted on it. "Often, children with [primary glaucoma] are not picked up until they're about 6 months old," he said.

Quick action is essential, because the vision loss that comes with glaucoma is irreversible.

Goree said she became concerned when she noticed her newborn's eyes had a "hazy, bluish-gray color." A pediatrician initially told her to not to worry, but Goree decided to take him to Loyola. That's where ophthalmologist Dr. Cathleen Cronin diagnosed Christian with glaucoma.

While the precise underlying cause is usually unknown, congenital glaucoma involves a developmental flaw in the structures that normally allow fluid to drain from the eye. That fluid buildup then stretches certain immature tissues in infants' eyes.

"The cornea gets so big, there can end up being 'breaks' in the back of the cornea," Frempong said. The cornea is the normally clear outer layer of the eye. In an infant with congenital glaucoma, it starts to take on a hazy appearance.

There are other glaucoma red flags, though -- which actually appear before the cornea enlarges, Medow said.

Frempong described them as the classic "triad" of symptoms: eyelid spasms, sensitivity to light and excessive tearing. But again, it can be easy for parents, or even their pediatrician, to attribute those symptoms to something else -- like "colic," Frempong said.

She said the bottom line for parents is that, if they think something is wrong with their baby's eyes, and their pediatrician has "any doubt" about the cause, see a pediatric ophthalmologist.

"The earlier we find it, the better it is for the child," Medow said.

With infant glaucoma, the treatment is almost always prompt surgery. There are different types, and repeat procedures are often necessary, Medow said.

Christian received a type of surgery where tiny silicone tubing is implanted in the eyes. The device is regulated by a valve and allows fluid to drain from the eye.

But she says Christian, now 18 months old, is doing well -- though he does need glasses to correct the vision loss he sustained. "He's running around, and has lots of energy," Goree said.

Christian's medical care is not over. The implanted devices will need to be replaced at some point, Barnes said. And all children treated for congenital glaucoma need regular doctor visits for the long haul -- to check that the pressure in their eyes remains normal and their vision is stable.

But Goree is thankful her son's condition was caught early enough to preserve much of his vision. "If you think something is wrong with your baby, trust your instincts and go to the doctor," she advised.

Barnes agreed. "When it comes to the health of their children, moms are usually right."