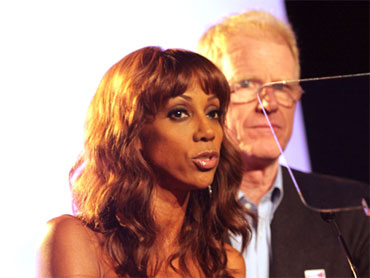 GLAAD is happy to be turning 25 years old.

The Gay and Lesbian Alliance Against Defamation celebrated its anniversary Friday night with a swanky cocktail party at the Harmony Gold Theatre in Los Angeles. Chaz Bono, Jean Smart, Amber Heard and Ed Begley Jr. were among the celebrity attendees who toasted the group, which focuses on how lesbian, gay, bisexual and transgender folks are presented in the media.

"We've made great progress in these media capitols," said Jarrett Barrios, president of GLAAD. "Beyond Hollywood, beyond New York, between these blue states, right at this nation's red center, we have miles to go. How far do we still have to go to ensure that an environment of respect exists for all lesbian, gay, bisexual and transgender people?"

GLAAD was first formed in 1985 in New York to protest the New York Post's coverage of AIDS. The organization went on to push for several changes throughout the media, such as the inclusion of a same-sex couple on the viewer-voted wedding contest on NBC's "Today" show and modifications to how gays are referred to in The Associated Press Stylebook.

The group now annually holds the GLAAD Media Awards, which actor Steven Weber called the "gayer Oscars," and releases the "Where We Are on TV" report, which tracks LGBT characters on network shows. This year's report found that there were 23 gay and bisexual characters on scripted network TV out of a total of 600, up 3 percent from last season.

"The steady stream of negative portrayals and censorship of gay and lesbian lives on film and in television has given way to much more realistic and life-affirming depictions, such as this year's 'The Kids Are All Right' and TV's 'Glee,"' said Richard Jennings, a former president of GLAAD who received the first-ever Founders' Award at the event.

Throughout the ceremony, attendees heard from former GLAAD board members, watched video montages of hallmark moments from the organization's past 25 years - such as when Ellen DeGeneres' character revealed she was a lesbian on her ABC sitcom in 1997 - and hissed at mentions of Anita Bryant, Laura Schlessinger, John McCain and Mel Gibson.

Jonathan Murray, co-creator of MTV's "The Real World," the long-running reality TV series that regularly includes gay and lesbian cast members, was bestowed with the Pioneer Award, given to a person or organization who significantly contributes to raising LGBT visibility in the media. Murray admitted the series never received much criticism.

"I think it's because it was real," he said. "How can you argue with something that's real?"
By AP Entertainment Writer Derrik J. Lang