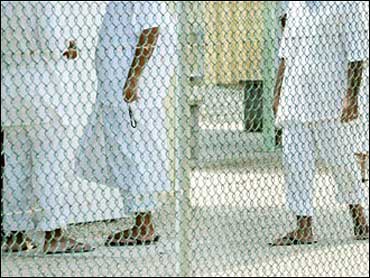 Nearly 40 more detainees have joined a hunger strike at the Guantanamo Bay prison camp for terror suspects, bringing the total to 128, an official said Tuesday.

Eighteen prisoners have been hospitalized, including 13 who are being tube fed, said Capt. John Adams, a spokesman for the detention center. The other five are receiving intravenous fluids.

Thirty-nine prisoners have joined the strike since Friday, Adams said. He said the number of hospitalized detainees had reached 22, but four were returned to their cells after their conditions improved. All are being monitored by doctors at the camp in eastern Cuba, he said.

"Everyone is stable at this time," Adams said. "If their condition appears to weaken, they will be brought to the hospital and either fed intravenously or nose fed."

The prison at Guantanamo holds about 500 prisoners from 40 countries. More than 230 other have been released or transferred to the custody of their home governments. The detainees are accused of ties to the al Qaeda terrorist network or Afghanistan's ousted Taliban regime. Most have been held for more than three years without charge.

The military has said that this latest strike began on Aug. 8, saying 76 detainees were refusing meals. On Friday, Guantanamo officials said the number had risen to 89.

The military's accounts conflict with an Aug. 31 report from the New York-based Center for Constitutional Rights, which claimed 210 prisoners were refusing meals. The center, which has filed legal challenges on behalf of detainees, said some have threatened to starve to death unless they are put on trial or released.

Lawyers from the center say detainees are angry because the military allegedly reneged on promises to bring the prison into compliance with the Geneva Conventions if detainees ended a hunger strike that started in late June and involved nearly 200 prisoners.

The military has said that only 52 detainees participated in the June strike, which was first disclosed by two detainees who had been released and sent home to Afghanistan.

Sgt. Justin Behrens, another Guantanamo spokesman, denied that the military had reneged on any promises. He said each cell block has chosen a prisoner to talk with military authorities about conditions at the camp.

The military has also denied the New York center's claim that at least three detainees were abused by the military's Extreme Reaction Force. Lawyers from the center said an interrogator threw a mini-refrigerator and a chair at a detainee on Aug. 5. Military police allegedly then beat him up.