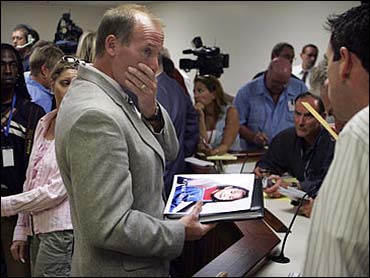 The news that two girls out on a Mother's Day bicycle ride were stabbed multiple times and left to die near a bike path has shaken the residents of this small city near the Wisconsin line.

Grief counselors were being brought to Beulah Park Elementary on Tuesday, where the girls, Laura Hobbs, 8, and Krystal Tobias, 9, were best friends in the same second grade class. The pupils just read "Charlotte's Web" and "A Taste of Blackberries," both of which deal with loss, school superintendent Constance Collins said Tuesday.

"I think that those stories will serve as an excellent backdrop for what we're going to have to deal with today," she told ABC's "Good Morning America."

"We will be monitoring the students," Collins said on CBS News' The Early Show. "There will be a time that they will be able to interact with others if they need assistance beyond what the school can provide. We have community resources as well as faith-based organizations that are ready to step up and assist in any way possible."

Now the search is on for those responsible, but Police Chief Doug Malcolm said Monday that authorities have had not identified any suspects and there were no solid leads.

"It was a crime not only against those kids but against all of us," Malcolm said.

However, police sources told the Chicago Tribune that an individual will be charged today in connection with the stabbing deaths, according to a report on the Tribune's Web site on Tuesday morning.

The girls' bodies were discovered in Beulah Park about four blocks from the school on Monday shortly after dawn, although police said no weapons were found and there was no evidence of sexual assault. A girl's bicycle was found nearby.

Due to the unseasonably cold weather, establishing the time of death may be tough, reports CBS News Correspondent Cynthia Bowers. Police have been back-tracking over the girls' final day, which Hobbs's grandmother said included kite-flying with her family.

She also said a relative was interviewed by police early Monday evening, the newspaper reported. Police said the relative had been interviewed and released.

"I can't believe she's gone," Hollabaugh said of her daughter.

Zion, along Lake Michigan, was founded in 1901 by a religious faith healer as a utopian community. It has about 22,000 residents but retains a quiet, at times rural feel despite being on the edge of both the Chicago and Milwaukee metropolitan areas.

Fifteen-year-old Albert Tobias said he didn't know of any reason why someone would want to attack his sister. "I really don't know anything. All I know is she got stabbed," he said in a brief phone interview. "But I would like to know what happened."

Laura Unrein, who lives near Beulah Park, said the area where the bodies were found is well known as a place to avoid. The heavily wooded park has a paved bike path, a ravine and trails made by mountain bikes.

"There have been incidents of kids beating up people and taking their wallets and park rangers have had to shoo people out of there for hunting illegally," she said, adding that it's also a popular hangout for teens to drink.

"Our children are told not to be down in that area," she said. "My husband and I don't go down there anymore because you hear the stories."

The parents of one of the girls had reported her missing about 8:50 p.m. Sunday, about two hours after she was expected home, Malcolm said. The parents of the other girl called shortly afterward, and authorities with rescue dogs began searching. A resident walking through the park discovered the bodies at dawn.

Lake County Coroner Richard Keller said it appears the girls were killed where their bodies were found. They had both been stabbed multiple times, authorities said.

"They were best friends. When one left, the other left. They were always together," said Unrein.

"It's been shocking for all of us," Collins added. "Their loss is felt by everyone here in the community."

The killings stunned this town about 45 miles north of Chicago, prompting police and Beulah Park Elementary School officials to escort children directly onto buses at the end of the school day.

"I know that they were very sweet girls," said Julie Dobnikar, who teaches second grade at the school, adding that the girls' teacher is "very distraught right now."

Dozens of anxious parents waited until their children emerged from the front doors of the school, then put their arms around their kids or clutched their hands as they walked to their cars.

"I'm concerned for their safety," Cynthia Taylor said of her granddaughters, ages 5 and 6. "It's bad and scary that people could be so cruel to innocent kids."