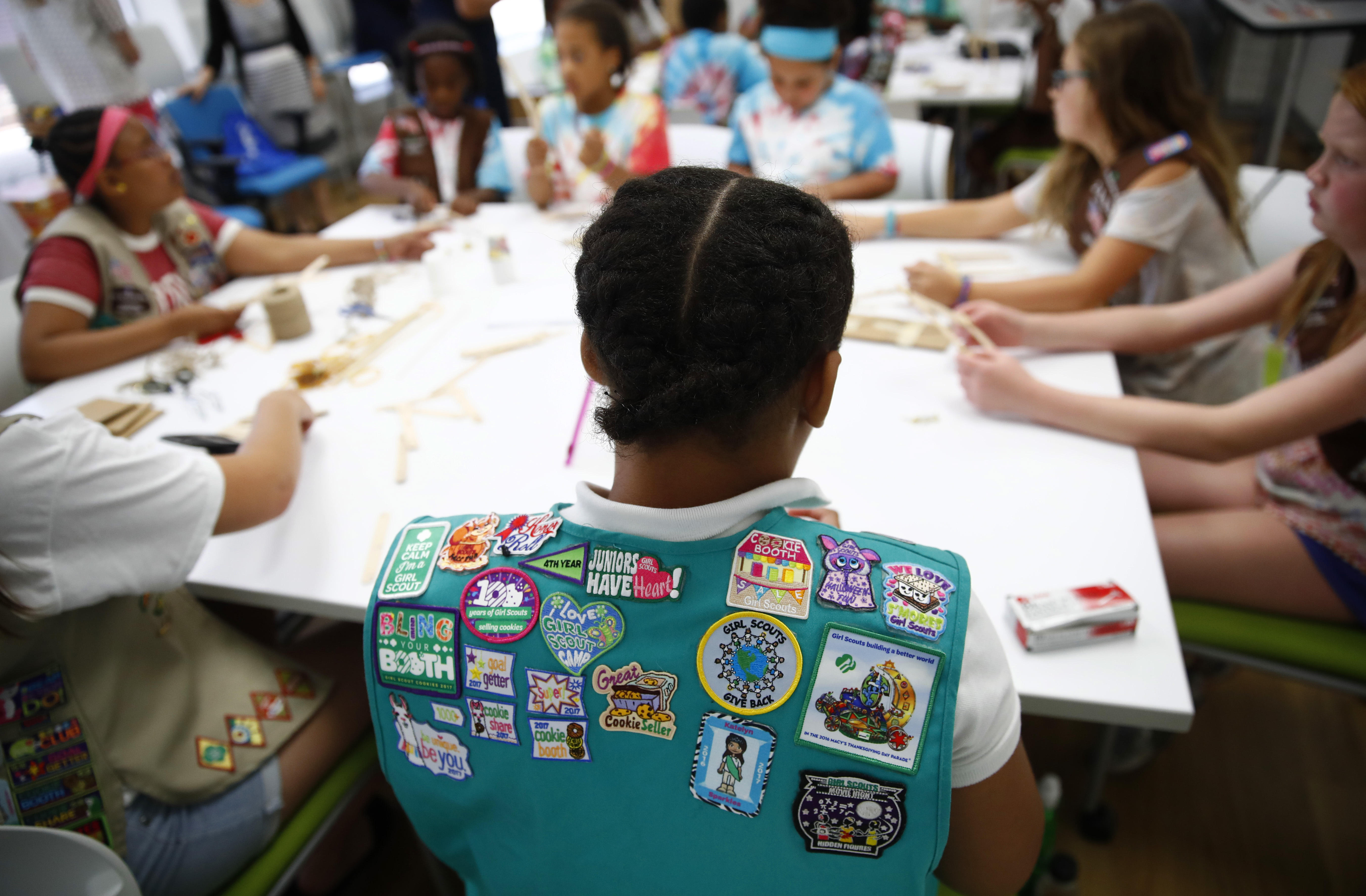 NEW YORK -- Inflaming a century-old and mostly cordial rivalry, the president of the Girl Scouts of the USA is accusing the Boy Scouts of seeking to covertly recruit girls into their programs while disparaging the Girl Scouts' operations.

"I formally request that your organization stay focused on serving the 90 percent of American boys not currently participating in Boy Scouts ... and not consider expanding to recruit girls," wrote GSUSA President Kathy Hopinkah Hannan in a letter sent this week to the president of the Boy Scouts of America, Randall Stephenson.

Top leaders of the two youth organizations, both struggling to stem membership declines, conferred this month about possibilities for coordination. But Hopinkah Hannan, in her letter, said she came away from that discussion feeling the Boy Scouts had already committed to an expansion of coed programs that would damage the Girl Scouts.

The letter was first reported by BuzzFeed News.

"We are disheartened to see the Girl Scouts pull away from the possibility of cooperation to help address the needs of today's busy families," she said Wednesday.

The Boy Scouts have some coed programs dating back nearly 50 years, but this year there has been extensive discussion within the BSA community about expanding opportunities for girls beyond existing coed programs, such as Venturing and Sea Scouts.

In 2015, a group of girls in North Carolina applied for full membership in the Boy Scouts and were rejected. The girls claimed the local scout council was breaking its own policy that bars discrimination based on gender. But the federal Title IX law that prohibits such prejudice contains a specific exemption for the Boy Scouts.

No final decisions have been made on coed programs, Delimarkos said, stressing that boys-only programs would remain at the core of the organization.

However, she said, the BSA -- in response to requests from families -- "has been exploring the benefits of bringing Scouting to every member of the family -- boys and girls."

To the Girl Scouts, such exploration amounted to a show of disrespect.

"Despite offering to engage in a constructive, collaborative sharing process, we were disappointed in the lack of transparency as we learned that you are surreptitiously testing the appeal of a girls' offering to millennial parents," Hopinkah Hannan said.

"This includes everything from disparaging and untrue remarks about Girl Scout programming, to subtle implications about the weakness of Girl Scouts' long term market strength," her letter said. "I implore you to condemn this behavior within your organization and to create consequences for these actions."

Delimarkos, in response, said the BSA, as an organization, has never disparaged the Girl Scouts and deeply respects its programs.

"Considering how many young girls and boys are not currently served by either of our programs, we believe we owe it to families to explore how we may be able to structure program offerings that fit into their busy lives to deliver character development and values-based leadership training," Delimarkos added.

The Girl Scouts, founded in 1912, and the BSA, founded in 1910, are among several major youth organizations in the U.S. experiencing sharp drops in membership in recent years. Reasons include competition from youth sports leagues, a perception by some families that they are old-fashioned, and busy schedules that prompt some parents to despair of meeting all their children's obligations. For some families, coed scouting programs could be a welcome convenience.

In February, the National Organization for Women issued a statement urging the Boy Scouts to allow girls to join. NOW said it was inspired by the efforts of a 15-year-old New York City girl, Sydney Ireland, to emulate her older brother, who is an Eagle Scout.

Unlike the Boy Scouts, the Girl Scouts have maintained girls-only status for all their programs; the empowerment of girls is at the core of its mission.

"We know that girls learn best in an all-girl, girl-led environment," says Andrea Bastiani Archibald, a psychologist who provides expertise on development for the Girl Scouts' national programming.

For at least the past decade, the Girl Scout community in the U.S. has been racked by internal debate over that programming. Some alumni have suggested there is an overemphasis on the sale of Girl Scout cookies and on academic-style programs, sometimes at the expense of robust outdoor activities.

The GSUSA's newly appointed CEO, Sylvia Acevedo, who holds an engineering degree, says she wants to strike a balance.

In October, the Girl Scouts are planning to host a three-day summit in Columbus, Ohio, that it describes as "the largest girl-led event in the world." An agenda drafted by high school girls is expected to cover such topics as career planning, healthy relationships and overcoming adversity.