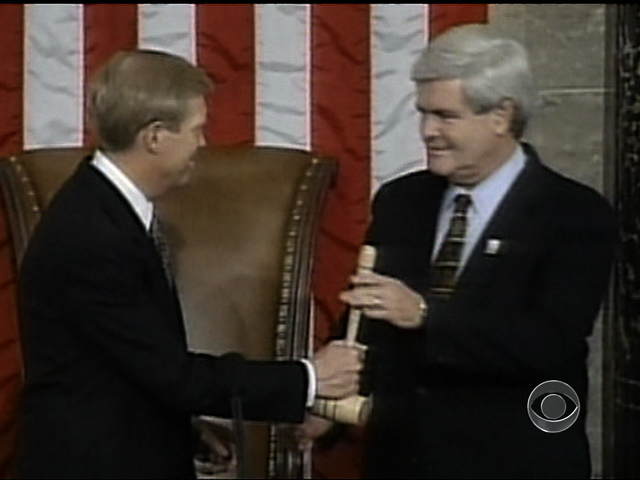 The Republican presidential candidates talked up their support for Israel Wednesday at a meeting of the Republican Jewish Coalition. Frontrunner Newt Gingrich promised to move the U.S. embassy there from Tel Aviv to Jerusalem.

Gingrich says his role as House speaker in the 1990s has prepared him to be president. CBS News correspondent Nancy Cordes asked some of Gingrich's Republican colleagues about those days.

Newt Gingrich led House Republicans out of the political wilderness in 1994 and into the majority for the first time in 40 years. So why do so many of those members disparage him today?

"He has these visions of grandiosity," said former Rep. Susan Molinari on MSNBC.

"I will have difficulty supporting him as President of the United States," said Oklahoma Sen. Tom Coburn on Fox News Sunday.

The bad blood developed over his management style and his role in the government shutdowns of 1995 and 1996. Republicans got the blame; President Clinton got reelected.

For Ohio Republican Steve LaTourette, he did not miss those days. He said Speaker Gingrich was always in crisis mode.

"We would meet in HC5 -- that's a room in the basement of the Capitol -- til 2, 3 in the morning," recalled LaTourette. "It seemed like 4 or 5 times a week. It always seemed like there was some emergency that needed to be dealt with."

Republicans were also embarrassed by the 84 ethics charges filed against Gingrich. After a lengthy investigation, he was only reprimanded for one violation -- taking tax deductible money to teach a politically-motivated college course.

But the damage was done, and in 1997, a couple dozen Republicans tried unsuccessfully to overthrow Gingrich.

"I think even if you ask Speaker Gingrich," said LaTourette, "he would acknowledge that he's had some flaws."

"For a long time I was his only endorsement," said Rep. Joe Barton of Texas with a laugh. He argued Gingrich accomplished more than most modern speakers.

"A lot of your fellow Republicans are coming out this week and saying he was an erratic leader when he was here in Congress. Did you experience that?" Cordes asked Barton.

"No ma'am. I don't think he was erratic. I think he was pragmatic. We did do the Contract with America when he was speaker, we balanced the budget, we did welfare reform. I mean, he did a good job."

After Gingrich was pressured to give up his speakership in 1998, he called his GOP detractors cannibals. But on Wednesday, he said they just weren't ready for his bold ideas and aggressive approach to reform.