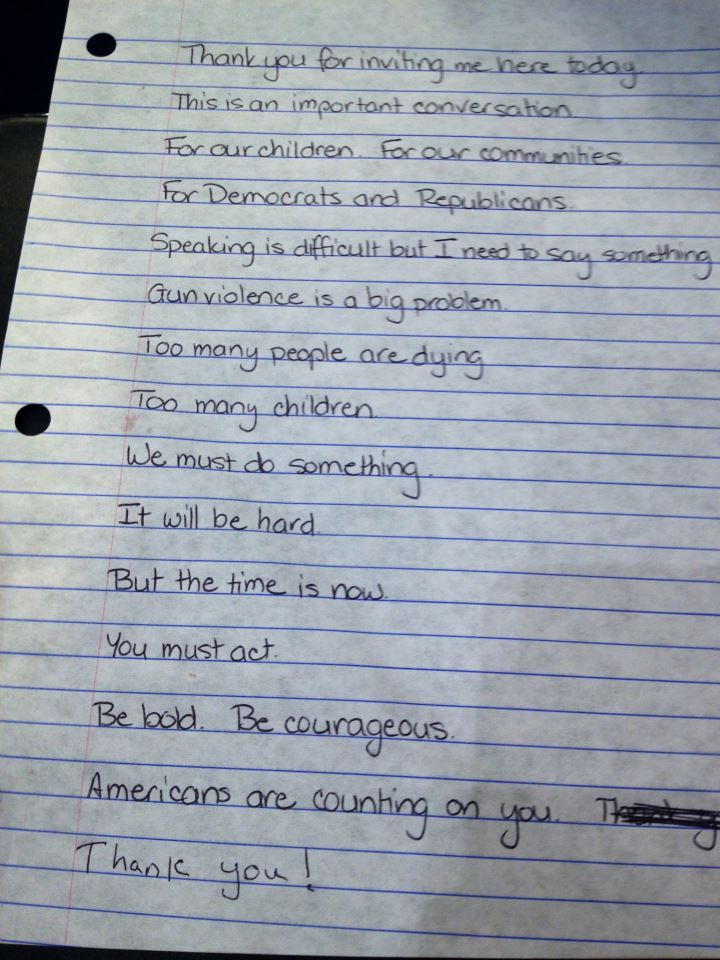 Former Rep. Gabrielle Giffords, D-Ariz., kicked off today's gun violence hearing in the Senate in dramatic fashion, reading a short but passionate statement urging Congress to "be bold" and "act" on gun violence.

Giffords' opening statement marked the first time she delivered remarks in Congress in over two years. The former congresswoman has made significant progress in her recovery after being shot in the head at close range in January 2011. The failed assassination attempt against Giffords left six other people dead, prompting Giffords and her husband Mark Kelly to push for action in Congress to reduce gun violence.

The picture above shows Giffords' testimony at today's Senate Judiciary Committee hearing. The notes were written by her therapist, according to her press aide. Giffords in her remarks acknowledged that "speaking is difficult."

After she spoke, Kelly testified in the hearing, telling the senators, "Gabby's gift for speech is a distant memory. She struggles to walk and she is partially blind. And a year ago, she left a job she loves, serving the people of Arizona."

Later today, Giffords and Kelly met with President Obama at the White House.

Editor's note: An earlier version of this story referred to these notes as "Giffords' handwritten notes." To be clear, CBS News later confirmed these notes were not physically written by Giffords herself, but by her therapist.