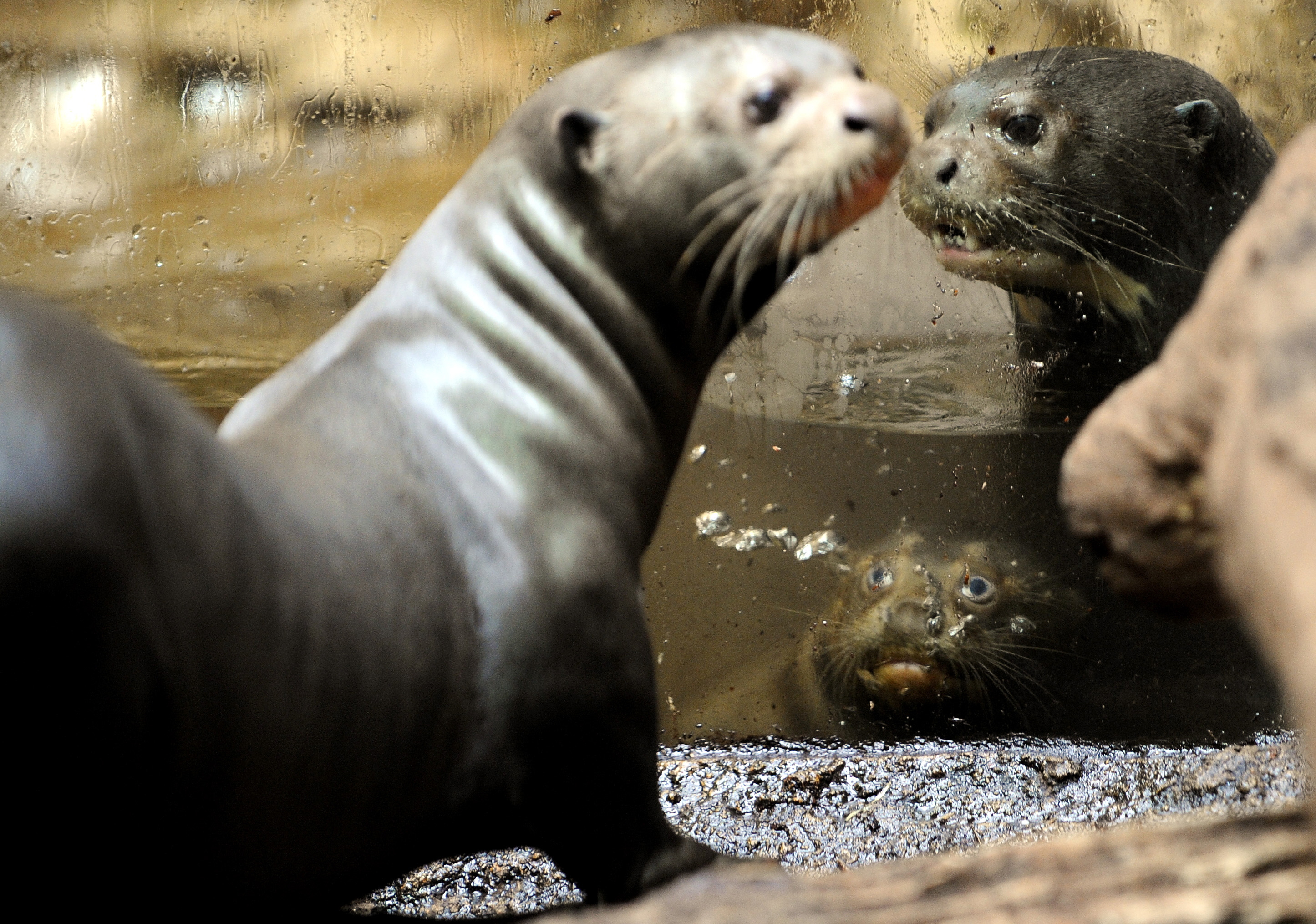 "What sound does an otter make?" probably wasn't in your books from childhood. But researchers have found that when giant otters get together, they love to chat.

In fact, a recent study found that the South American mammals make 22 distinct sounds as adults. They call group members with a whistle, greet them with a bark and have a unique growl when defending a meal of catfish or juvenile caimans. Cubs, which make 11 sounds, have several unique ones that indicate begging, since they depend on their parents to feed them.

"A very practical result of our studies is that it provides important information for animal keepers caring for captive giant otters, as well as for tourist guides showing wild giant otters to people from all over the world," said Christina A. S. Mumm, who along with Mirjam Knornschild, recorded the sounds in German zoos and the wilds of Peru for a study that appeared this month in PLOS One.

"A detailed catalogue of the call types may provide interesting information for tourists and zoo visitors, which can be used to increase the awareness of how wonderful and interesting giant otters are, and that they are worthy of being protected," she told CBS News.

Mumm also said the otter's vocal complexity provides further evidence that species living in large social groupings, as these mammals do, have a greater range of sounds than more solitary species. Similar findings have already been discovered in birds, primates, marmots and wolves.

"This concept is called the social complexity hypothesis for communication. It assumes that the social life in a group is challenging and therefore animals need an adequate way of communication to regulate the close and frequent interactions among group members," Mumm said. "The social organization of the 13 otter species reaches from a solitary lifestyle to the formation of highly social groups. And seemingly, otters with a social lifestyle use more distinct calls than the solitary ones."

The 22 sounds comprise one of the largest vocabularies present in any otter species, and compare favorably other, more widely recognized vocal animals, including non-human primates. Bonobos, for example, make 38 sounds, chimpanzees 29 and Gelada baboons 22.

Robert Wallace, the Wildlife Conservation Society's Greater Madidi-Tambopata Landscape Conservationist, said in an e-mail interview he was not surprised "that the described vocal repertoire is this rich" for giant otters.

"Indeed, as a social carnivore one would absolutely expect a rich repertoire of vocalizations," Wallace said.

Wallace said the new findings could help efforts to conserve what he described as one of Latin America's most charismatic wildlife species and better manage sites where tourists may be increasing their "stress levels" by getting too close.

"By understanding more of the complexity of giant otter vocalizations, the possibilities increase for the sustainable management of tourism initiatives such that giant otters are not negatively affected while they and their habitat is protected," he said.

Mumm said her study illustrates there remains much unknown about giant otters and she encouraged researchers to spend more time studying their "mental abilities and other senses."

"Smell is highly important for otters, but still, we do not know a lot about what they communicate with smell," she said. "And how do otters manage to find the fishes underwater? It is assumed that they use their whiskers to trace the movements of their prey, but as far as I know this has not been proven ...We already know that giant otters and Asian small-clawed otters can discriminate among individual species members. But are they also able to truly recognize others or even themselves?"