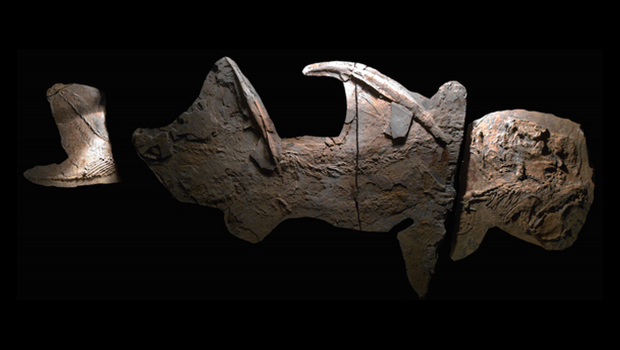 A mega shark that lived 300 million years ago would have made today's great whites look like shrimps, according to fossils of the beast unearthed in Jacksboro, Texas.

Scientists have dubbed the newfound fossils the "Texas supershark," and the name is fitting: These supersharks were enormous: more than 26 feet (8 meters) long, or more than half the length of a school bus. That's 25 percent larger than the modern great white shark and more than three times as long as other fossil sharks, including the Goodrichthyseskdalensis shark discovered in Scotland and another newfound shark specimen from New Mexico, both of which measure between 6.5 feet and 8.2 feet (2 m and 2.5 m) from head to tail. (Earth's largest shark, C. megalodon, could grow up to 60 feet, or 18 m, long during its heyday, between about 16 million and 2.6 million years ago.)

Supershark's ancient age makes it a prize find, indicating that giant sharks go back much further in the fossil record than previously thought, the researchers said. They presented their unpublished findings Friday at the 75th annual Society of Vertebrate Paleontology conference, in Dallas, Texas.

When supershark was alive, during the Carboniferous period, a shallow sea called the Western Interior Seaway covered Texas and much of the American West. The fossil remains of the sea's marine life are still being uncovered in the ancient seabed, which is how study co-author Robert Williams, of the Dallas Paleontological Society, discovered the larger of two partial supershark fossil braincases. Another collector found a number of large and pointy, fossilized shark teeth, but it's unclear whether these belonged to the Texas supershark or to another ancient species, the researchers said.

The braincases, which comprise the back end of the sharks' skulls, resemble the corresponding skull parts of other Paleozoic fossil sharks, but "are clearly different from the far shorter" back skull regions of modern sharks, the researchers said.

To calculate the body size of the supershark without a complete specimen, lead researcher John Maisey, a curator of vertebrate paleontology who specializes in fossil fishes at the American Museum of Natural History in New York City, and his colleagues had to get creative.

If the Texas supershark shared the same proportions, its roughly 31.5-inches-long (80 centimeters) skull suggests that its body was likely more than 26 feet long, Maisey said. The other supershark they discovered likely measured about 18 feet (5.5 m), Maisey said.

Further research is needed to determine whether the Texas supershark specimens represent a known species, such as Glikmanius occidentalis, or a species that has yet to be discovered, Maisey said. But the newly found shark's close relative, the ancient shark from Scotland (Goodrichthys eskdalensis), suggests that this group of sharks had successfully dispersed across large distances. [Dangers in the Deep: 10 Scariest Sea Creatures]

The conference held another gem for shark enthusiasts. During a dig in a New Mexico quarry, John-Paul Hodnett, a graduate student of biology at Saint Joseph's University in Philadelphia, discovered a nearly complete fossilized shark that also dates to about 300 million years ago.

The specimen, a female, measures about 0.6 feet (2 m) long and sports teeth that "are actually brand-new to science," Hodnett told Live Science. "We've never seen this type of tooth before." He plans to analyze the teeth in an upcoming study, he added.

That fossil is so complete that studying it may help researchers better describe ctenacanths, a group of ancient sharks, he said.

"There's a lot of missing data," Hodnett said. "My advisor is always saying if you can't find data, go out digging."