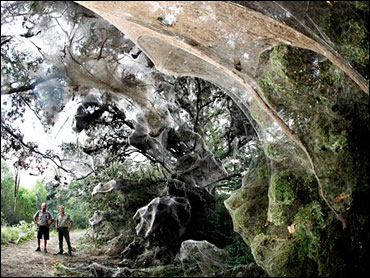 Entomologists are debating the origin and rarity of a sprawling spider web that blankets several trees, shrubs and the ground along a 200-yard stretch of trail in a North Texas park.

Officials at Lake Tawakoni State Park say the massive mosquito trap is a big attraction for some visitors, while others will not go anywhere near it.

"At first, it was so white it looked like fairyland," said Donna Garde, superintendent of the park about 45 miles east of Dallas. "Now it's filled with so many mosquitoes that it's turned a little brown. There are times you can literally hear the screech of millions of mosquitoes caught in those webs."

As creepy as it is, it's not the work of one giant spider, but a community of thousands. No one knows exactly why the spiders joined forces, but it's a surprising level of cooperation among the eight-legged engineers that has even insect experts scratching their heads, reports Russ Mitchell, co-anchor of CBS News' The Early Show.

"I think its just one of those freak occurrences, amazing things that nature does to wake us up," Garde tells CBS News.

Spider experts say the web may have been constructed by social cobweb spiders, which work together, or could be the result of a mass dispersal in which the arachnids spin webs to spread out from one another.

"I've been hearing from entomologists from Ohio, Kansas, British Columbia - all over the place," said Mike Quinn, an invertebrate biologist with the Texas Parks and Wildlife Department who first posted photos online.

"From what I'm hearing it could be a once-in-a-lifetime event," he said.

But John Jackman, a professor and extension entomologist for Texas A&M University, said he hears reports of similar webs every couple of years.

"There are a lot of folks that don't realize spiders do that," said Jackman, author of "A Field Guide to the Spiders and Scorpions of Texas."

"Until we get some samples sent to us, we really won't know what species of spider we're talking about," Jackman said.

Garde invited the entomologists out to the park to get a firsthand look at the giant web.

"Somebody needs to come out that's an expert. I would love to see some entomology intern come out and study this," she said.

Park rangers said they expect the web to last until fall, when the spiders will start dying off.