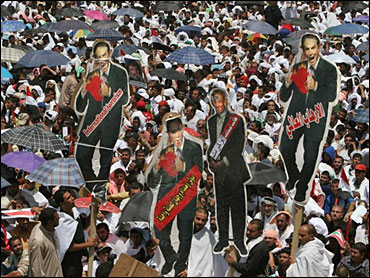 Tens of thousands of Shiites thronged a Baghdad slum Friday to show support for Hezbollah as Arab anger toward Israel mounted on the Muslim holy day. Such protests have even reached Saudi Arabia, where public discontent is rare.

In the most violent demonstration, about 100 people threw stones and a firebomb at the British Embassy in Tehran, damaging the building but harming nobody as they accused Britain and the United States of being accomplices in Israel's fight against Hezbollah, a Shiite group in Lebanon that is backed by Persian Iran.

Even Sunni Muslim demonstrators took to the streets of Damascus, Cairo and Amman. But their numbers were dwarfed by the huge Shiite turnout in Baghdad, organized by anti-American cleric Muqtada al-Sadr.

Crowds of al-Sadr supporters from across Iraq's Shiite heartland converged on the capital's Sadr City district, chanting "Death to Israel, Death to America" in the biggest pro-Hezbollah rally since the conflict began July 12.

"Allah, Allah, give victory to Hassan Nasrallah," the crowd chanted before burning Israeli and American flags.

Al-Sadr and his supporters could spell real trouble for American soldiers on the ground, reports CBS News correspondent Mark Strassmann.

"They would like to get the Americans out," former Ambassador Peter Galbraith, a critic of the Iraq War, told Strassmann. "The attacks on Lebanon become a rallying cry, a vehicle for which they could inflame popular sentiment against the United States."

Organizers and local police said hundreds of thousands attended the rally, but the U.S. military later estimated the crowd at 14,000. Associated Press reporters at the scene thought attendance was at least in the tens of thousands during the high point of the march.

At least five members of the Iraqi parliament from al-Sadr's movement attended the Baghdad demonstration, but the cleric himself was not there, presumably because of safety concerns.

In Saudi Arabia, hundreds of Shiites, who make up about 12 percent of the predominantly Sunni country's population, have marched over the past three days in al-Qatif municipality in the Gulf coast region.

Under the watchful eyes of anti-riot police during a demonstration Thursday, protesters chanted: "No Sunni, no Shiites, only one Muslim unity" while others waved posters of Nasrallah chanting "Oh Nasrallah, oh beloved one, destroy destroy Tel Aviv."

Israel launched its military campaign after Hezbollah guerrillas captured two Israeli soldiers and killed three others in a cross-border raid. Saudi rulers issued a statement chastising the group for "uncalculated adventures," and a popular Sunni cleric even issued a religious edict that Muslims disavow Hezbollah.

But with the death toll of Lebanese civilians now in the hundreds and some 1 million people displaced, the Saudi government has backpedaled on its stance, even allowing rare demonstrations in favor of Hezbollah.

Support for Hezbollah has spread among Sunnis, despite tensions between the sects over Iraq and the rise of Shiite-dominated Iran.

Arab League Spokesman Hesham Youssef said in Cairo an emergency meeting of Arab foreign ministers would be held in Beirut on Monday "as a way to express the Arabs' solidarity with the Lebanese people, of which they will discuss the standoff in Lebanon."

Such fatwas are "only benefiting the Zionist entity. ... The ones who are resisting are the Lebanese people and we have to support them," he said.

Ten people were arrested and four injured, including two police, when demonstrators clashed with officers in Amman, Jordan. Police had to use batons to stop a crowd of about 200, some waving Hezbollah flags, from marching from their mosque to the Israeli Embassy after noon prayers.

In Damascus, the Syrian capital, about 500 Communist Party protesters staged a sit-in. They carried Syrian, Lebanese, Palestinian and Hezbollah flags, and photos of Syrian President Bashar Assad and Nasrallah.

The protesters carried banners with slogans like: "Glory to the heroes of the resistance in confronting the outrageous U.S.-Zionist aggression."

"It's a clear and big plot led by the U.S. and Israel in the pretext of rebuilding the Middle East," said Ibrahim Zgheir, 57. "Lebanon is an entrance and the plan would expand to other countries."

"Oh Mubarak Oh Abdullah, you let us down," protesters chanted while calling on the Egyptian government to open the way for volunteers to join Hezbollah.