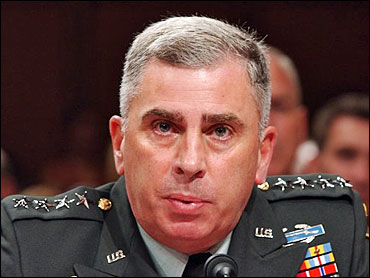 Two of the Pentagon's most senior generals conceded to Congress on Thursday that the surge in sectarian violence in Baghdad in recent weeks means Iraq may descend into civil war.

"Iraq could move toward civil war" if the violence is not contained, Gen. John Abizaid, the top U.S. commander in the Middle East, told the Senate Armed Services Committee.

"I believe that the sectarian violence is probably as bad as I have seen it," he said, adding that the top priority in Iraq is to secure the capital, where factional violence has surged in recent weeks despite efforts by the new Iraqi government to stop the fighting.

Gen. Peter Pace, chairman of the Joint Chiefs of Staff, told the panel, "We do have the possibility of that devolving into civil war." He added that this need not happen and stressed that ultimately it depends on the Iraqis more than on the U.S. military.

"Shiite and Sunni are going to have to love their children more than they hate each other," Pace said, before the tensions can be overcome. "The weight of that must be on the Iraqi people and the Iraqi government."

President Bush and Defense Secretary Donald H. Rumsfeld have steadfastly refused to call the situation in Iraq a civil war, although Rumsfeld at a news conference on Wednesday acknowledged that the violence is increasing.

In the latest violence in Iraq, a bomb strapped to a motorcycle exploded Thursday in the center of Baghdad, killing at least 12 people and injuring 29, police said. At least 13 other people were killed or found dead Thursday across the country, including nine bodies found floating in the Tigris River – some of them bound and with bullet wounds in their bodies.

Their assessments echoed those in a confidential report from Britain's outgoing ambassador to Iraq. Ambassador William Patey, in a memo to top British officials quoted Thursday by the BBC, said Iraq is sliding toward civil war and is likely to divide eventually along ethnic lines.

Rumsfeld, who testified alongside Abizaid and Pace, did not comment directly on the prospect of civil war but said Iraq's future lay in the hands of Iraqis, beginning with a reconciliation process that has yet to get under way.

"Ultimately the sectarian violence is going to be dealt with by Iraqis," Rumsfeld said.

He denied that he had ever "painted a rosy picture" of the situation in Iraq.

Pressed about the prospect of reducing U.S. troop levels in Iraq, Rumsfeld stuck to his usual assertion that it depends on conditions and on the ability of the Iraqi government to suppress sectarian tensions. He said the Pentagon is seeking a careful balance between having too few troops and having too many.

President Bush last week approved an increase in the number of U.S. troops in Baghdad as part of a new effort to help Iraqi security forces get a grip on the sectarian tensions.

Abizaid also said under questioning that it was possible that U.S. casualties could rise as a result of the battle to contain sectarian violence in the capital.

"I think it's possible that in the period ahead of us in Baghdad that we'll take increased casualties — that's possible," he said.

Later in the hearing, Abizaid expressed confidence that the Iraqi government is moving in the right direction.

He also told the committee that his comment about the possibility of civil war did not mean he expects one. "Speaking for myself, I do not believe it is probable," Pace said.

The surge in sectarian violence has prompted the U.S. command to move thousands of additional troops to Baghdad to try to reclaim the streets from gunmen.

On Wednesday, sectarian and political violence claimed at least 53 lives, including 11 young soccer players and spectators who died when two bombs exploded in a field in a Shiite neighborhood of Baghdad. More than 70 people were killed on Tuesday.

According to figures compiled from Iraqi security and health department figures, more than 1,000 civilians, 135 members of security forces and 143 insurgents were killed nationwide in July. In addition, 1,800 civilians were injured.