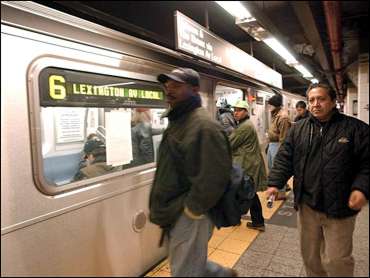 When it comes to commuting times, no city tops the Big Apple.

The average New York City resident spends 38 minutes getting to work, nearly six minutes more than runner-up Chicago, according to the Census Bureau. Philadelphia, Riverside, Calif., and Baltimore rounded out the top five cities with 250,000 or more people.

The national average is over 24 minutes, about two minutes more than in 1990.

Among states, New York was first, with a typical commuting time of 31 minutes, followed by Maryland, New Jersey, Illinois and California.

The New York metropolitan area has one of the most comprehensive and heavily used mass transit networks in the nation. City residents may take a little longer to get to work by subway than people who drive from their homes to suburban office parks.

"But what you lose in travel time, you make up for by being able to read a newspaper," said New York City resident Gene Russianoff, a staff attorney for the New York Public Interest Research Group's Straphangers Campaign, an advocacy group for city subway and bus riders. "By and large, it's lower stress."

More people are driving to work alone - about 77 percent in 2002, up from 73 percent in 1990, Census Bureau demographer Phil Salopek said.

Suburbs are pushing farther out from downtown hubs, attracting families looking for cheaper or bigger homes. More people are also commuting to sprawling office parks, which are often so far outside central cities that they aren't accessible by mass transit.

The increased traffic has put an even greater chokehold on roads, according to a report released last week that was commissioned by the American Highway Users Alliance. That study found that the number of U.S. traffic bottlenecks - places where highways can't handle all the cars - rose 40 percent over five years to 233 in 2002.

The census figures are from a comprehensive 2002 bureau survey and cover the one-way commuting time for workers 16 and older.