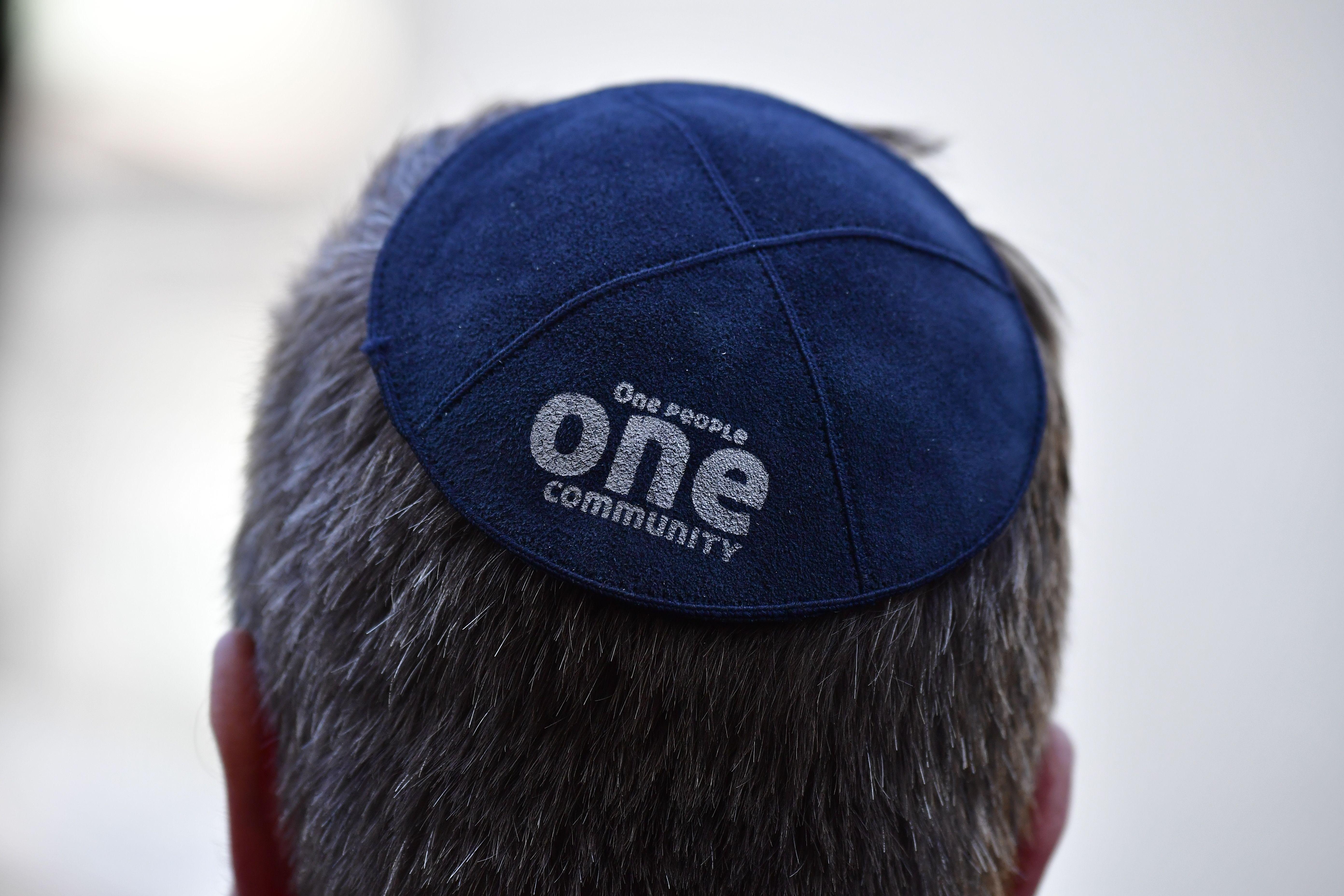 BERLIN -- Germans of various faiths donned Jewish skullcaps and took to the streets Wednesday in several cities to protest an anti-Semitic attack in Berlin and express fears about growing hatred of Jews in the country. The kippa protest was triggered by the daytime assault last week of two young men wearing skullcaps in an upscale neighborhood in the German capital.

The attack, in which a 19-year-old Syrian asylum-seeker is a suspect, drew outrage in Germany and sharp condemnation by Chancellor Angela Merkel.

It is the latest of several anti-Semitic incidents that have many Jews wondering about their safety in Germany, which has tried to atone for Nazis' killing of 6 million European Jews in the Holocaust more than 70 years ago.

The rising tensions have come as a time when Germany has been grappling with an influx of more than 1 million mostly Muslim migrants, along with the rise of a nationalist party, the Alternative for Germany, which was elected to Parliament last year. Its leaders are known for their openly anti-Muslim stance, but their anti-Semitism is less apparent.

Across Europe, anti-Semitism has been on the rise in recent years, and thousands of Jews - mostly from France - have moved to Israel.

About 150 people - Jews, Muslims, Christians and atheists - came together Wednesday and put on kippas in a show of solidarity in the eastern city of Erfurt. Other rallies were expected later in the day in Berlin, Cologne and Potsdam.

In last week's attack in Berlin, the 21-year-old victim, an Arab Israeli who said he wore the kippa in a show of solidarity with his Jewish friends, caught the assault on video, which quickly went viral. It showed a young man whipping him violently with a belt while shouting "Yahudi!" - Jew in Arabic.

The RIAS group that tracks anti-Semitism said there were 947 anti-Semitic incidents last year in Berlin, including 18 attacks and 23 threats last year.

Schuster's comments on hiding the skullcap drew sharp criticism from other Jewish leaders, who say Jews should wear a kippa to show they're not afraid.

"Jewish identity is not something we should hide," said Rabbi Yehuda Teichtal. "We have to be proud of who we are and at the same time fight anti-Semitism."

For years, many Jewish men in Germany and across Europe who wear the kippa as a symbol of their devotion to God have been hiding their skullcaps under baseball hats when they are in public.

Anti-Semitism has existed in Europe for hundreds of years, often fanned by Christian churches who have blamed Jews for the killing of Jesus. In recent decades, however, Muslim immigrants have added a new strain by holding Jews responsible for the Israeli-Palestinian conflict.

"We also have new phenomena (of anti-Semitism in Germany). We have refugees now, for example, or people of Arab origin who are bringing a different type of anti-Semitism into the country," Merkel told Israeli TV this week. "In the new government, we have for the first time appointed a commissioner for Jewish life in Germany and in the fight against anti-Semitism."

The new commissioner, Felix Klein, starts his job in early May.

The decision followed a recommendation by experts and came amid concerns over the bullying of Jewish children in schools in recent months and the burning of Israeli flags during a recent pro-Palestinian protest in Berlin.

Earlier this month, a rap band that included cynical references about the Auschwitz death camp in its lyrics won the Echo award, Germany's most important music prize, drawing strong criticism from other artists and government officials. After several past winners said they would return their awards, the German music industry behind the Echo said Wednesday it would scrap the prize in its current form.

Thousands of French Jews have left for Israel in recent years, but France still has the highest Jewish population in Europe, about half a million.

Around 200,000 Jews live in Germany, most of them immigrants from the former Soviet Union. That's fewer than half of the 500,000 Jews who lived in the country before the Holocaust.

Some 3.3 million Jews lived in Poland on the eve of the Holocaust, making it Europe's largest Jewish community, and the second-largest in the world. There are no exact numbers today because many people with Jewish roots do not register. Estimates are in the thousands.

Poland witnessed a startling wave of anti-Semitic comments earlier this year by government and officials amid a dispute with Israel over a new Polish law. The law criminalizes blaming Poland for Holocaust crimes. The anti-Semitic rhetoric, unprecedented in Poland in 50 years, deeply shook the country's tiny Jewish community.

Despite the rhetoric, Poland is still considered one of the safest countries in Europe for Jews, with violence extremely rare. With no radical Muslim population and no left-wing anti-Semitism, Jews in Poland have to worry only about the extreme right, which is small but growing more emboldened.