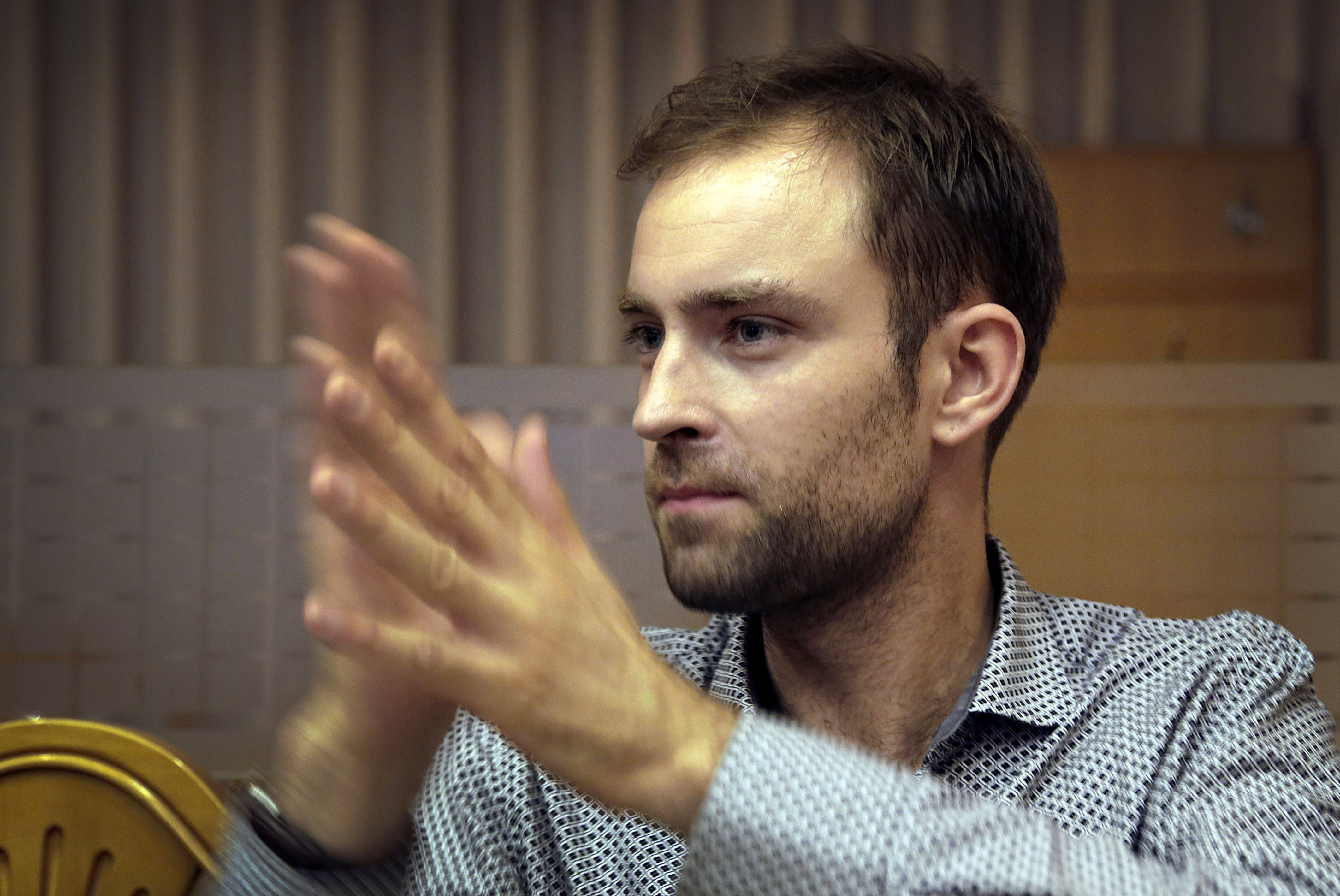 PYONGYANG, North Korea -- In a country with zero kindergartens specifically for the deaf, Robert Grund wants to help establish the first - just a small suite of rooms for perhaps a couple dozen kids, in North Korea's capital, Pyongyang, a city of roughly 2.5 million.

It's a small step, but Grund, the Pyongyang representative of the World Federation of the Deaf and the city's only full-time deaf foreign resident, sees it as part of a larger push to end isolation for the deaf here by helping them be heard, involved and empowered in projects about them.

He appears to be making progress.

Over the past few years, North Korean officials have grown more receptive to helping the disabled. Events have become more frequent and get a higher profile in the state-run media, while more cultural exchanges are being allowed abroad. Recent media stories played up a new all-deaf soccer team. The North last month held high-profile events to mark Disabled Persons Day.

The kindergarten project is also coming together.

Grund says officials have approved a location for the facility, several rooms in a now under-used nursery building, and appear keen on opening it in time for the 70th anniversary of the founding of the country's ruling party on Oct. 10.

The kindergarten itself will be wholly paid for and funded by TOGETHER-Hamhung, a German non-profit Disabled Persons Organization.

"Nobody knows how many kids will come," Grund said in a recent interview with The Associated Press. "If necessary, we can assign more rooms for children."

The plan is to accept children from infancy on up until they are old enough to attend regular deaf schools. Grund hopes access will be based solely on need, but he is not sure whether the government will instead decide who gets to go.

"From our point of view, every deaf child has access," he said. "Since this country strongly advertises the right of children to be in nurseries and kindergartens, it is probably not so much a matter of choosing, but a matter of information and spreading the word so that the families get to know the new option and dare to bring their deaf child, overcoming the traditional hiding in the family."

To be deaf in North Korea is to endure a level of isolation that is hard to imagine.

For most of his childhood, Ri Jong Hyok was a shut in.

While his father went out to do construction work, he stayed at home in Pyongyang helping his mother make tofu. He didn't go to school. He had no friends and, with no one to teach him sign language, essentially no way to communicate with them even if he did.

"I had never seen sign language before I came here," Ri told the AP through a sign language interpreter during a visit to the country's largest school for the deaf, in Songchon, outside of Pyongyang, last year.

Ri is lucky to have found the school.

He wants to be a barber, and the school has a classroom where the students practice cutting each other's hair, with barber's chairs and pictures of various hairstyles on the walls. With few other trades open to the deaf, the most common jobs are barber or tailor for men, and hairstylist or seamstress for women.

Of the eight schools for older deaf children in North Korea, none are located in Pyongyang, though statistically the deaf population in a city the same size in a developing country would likely be in the tens of thousands.

There are roughly 300,000 deaf people in all of North Korea, according to official estimates.

But while about 10-20 percent of deaf children in developing countries are able to study in deaf schools, according to the World Federation of the Deaf, that rate is just 2 percent in North Korea, said an aid worker who spoke on condition of anonymity because of worries that ongoing projects might be hurt.

Ro Kyong Su, director of the Korean Economic and Cultural Center for the Deaf and Blind, said mainstream public schools or other special-needs facilities currently accommodate most deaf or hearing-impaired students. By his calculations, there are about 6,000 school-age deaf children who need to be in schools that are specifically for the deaf. He said about half already are, and the number is rising.

"The other half will soon be able to go to school. We aren't looking at a five-year or 10-year plan. It will be much sooner than that," he said.

Officials involved in projects for the deaf acknowledge an outdated grasp of the size of the deaf community.

A major problem continues to be getting access to and diagnosing pre-school children, many of whom are shut in at home with families who have little awareness of hearing disabilities or the resources that might be available to them.

The government's figures are also based on an old, somewhat ambiguous survey. Underreporting of disabilities is common, both because of a sense of shame and a fear among parents that, if reported, their children might be sent off to distant institutions, pigeonholed and channeled into an educational or career path with few opportunities. Nevertheless, a new survey is underway, which Ro believes will provide a more reliable picture.

Grund, possibly more than anyone else, has helped influence the change in attitudes toward the deaf here.

As a teenager, he watched a TV report in his native Germany suggesting there were "practically no" deaf people in North Korea. A fourth-generation deaf child in his own family, an incredulous Grund decided to go see for himself. Grund, now 30, has since devoted himself to improving life for deaf North Koreans. He works with the bureaucracy and with the deaf to train them to plan and lead their own projects.

Though funding is always a struggle, he has received support from Catholic and Protestant groups and private donors, mainly in Germany. The biggest individual contribution came from Michael Spavor, of Paektu Cultural Exchange and the organizer of former NBA star Dennis Rodman's visit last year, who donated $20,000 to the deaf kindergarten project.

Grund's mantra for empowering the deaf, "nothing about us without us," often rankles with even the most sympathetic North Korean officials. In the country's top-down system, hearing bureaucrats who often don't understand the deaf experience are used to making decisions on their behalf.

Grund says he will continue to cooperate with deaf North Koreans - he currently works closely with about 20, up from just two in 2013 - to help them join mainstream society.

One priority is more schools for occupational training and educational opportunities for the deaf. Another is teaching more deaf children - and interpreters - how to sign. He also wants sign language interpretation made available at workplaces and meetings. But most of all, he wants to see signing on national television broadcasts, if just to raise awareness in the hearing community that the deaf exist and need not be hidden away.

"That has been my oldest dream, from the time I first came here," he said.