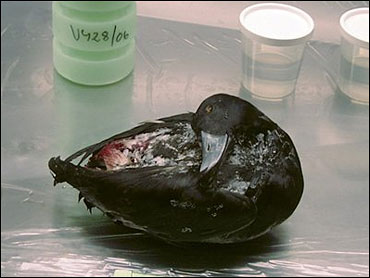 The cat was found over the weekend on the Island of Ruegen, where more than 100 wild birds have tested positive for H5N1, said Thomas Mettenleiter, head of Germany's Friedrich Loeffler Institute. The cat is believed to have eaten part of an infected bird, following a pattern of disease transmission seen in big cats in Asia, the institute said.

Mettenleiter insisted, however, there was no danger to humans, as there have been no documented cases of a cat transmitting the virus to a human.

"It has nothing to do with the spread of the disease or the threat of an epidemic," Mettenleiter told ZDF television. Local authorities, however, urged pet owners to keep their animals indoors as a precaution.

Maria Cheng, of the World Health Organization in Geneva, however said there was not yet enough information on how the disease is transmitted to be sure. She noted that tigers and snow leopards had been infected in Thailand after being fed chicken carcasses, dying from H5N1 in 2003 and 2004.