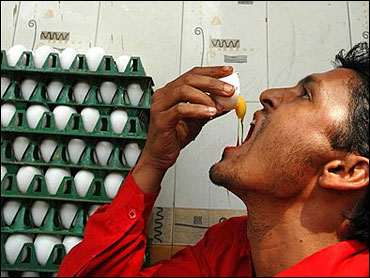 The U.N. health agency on Monday raised its tally of officially confirmed human cases of bird flu by three to 173. It said 93 of those were fatal, raising the number by one.

The new cases on the World Health Organization's list are two people in China reported in critical condition and a 27-year-old woman from Indonesia's West Java province who died last week.

WHO figures usually lag behind reports in individual countries, because it considers a person to have bird flu only after samples have been sent abroad and confirmed as H5N1 positive in a foreign laboratory.

Almost all human deaths from bird flu have been linked to contact with infected birds.

In Indonesia, investigations carried out by local authorities "found reports of chicken deaths in the woman's neighborhood four days prior to her onset of symptoms," WHO said in a statement.

In China, however, one of the patients came from the eastern province of Zhejiang, where there have been no reported animal outbreaks since 2004, the agency said.