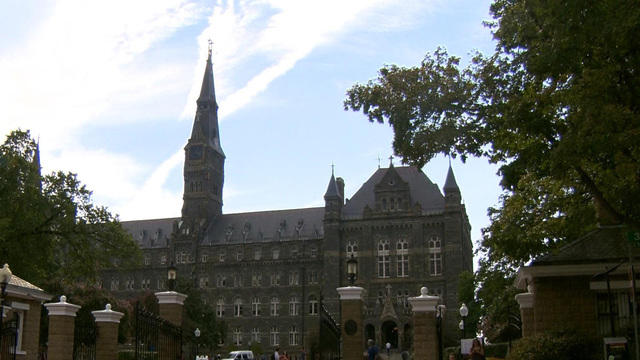 Georgetown University​ wants to reconcile its past and make amends for its contribution to what the school’s president called our nation’s “original evil.”

Georgetown University is offering an act of contrition for its complicated past, reports CBS News correspondent Errol Barnett. The nation’s oldest Catholic and Jesuit college announced Thursday it will give preference in admissions to descendants of 272 slaves​ it sold nearly two centuries ago. The sale helped pay the school’s debts.

“This community participated in the institution of slavery,” said Georgetown University President John DeGioia. “This original evil that shaped the early years of the Republic was present here.”

DeGioia acknowledged the history of slavery at America’s oldest Jesuit university. He then offered atonement.

“Our moral agency must be channeled to undo this damage,” DeGioia said.

That effort includes building a memorial and creating an institute to study slavery’s legacy. Georgetown will also rename two buildings on campus, including one for a runaway slave named Issac. The University still has the document offering $30 for his capture.

But the biggest gesture may be the offer of preferential admission status to the descendants of the 272 sold slaves. That could affect an estimated 10,000 to 15,000 people.

A small group of descendants were on hand for Thursday’s announcement. Thomas and Karran Harper Royal came to Washington from Louisiana, where their ancestors were resettled nearly two centuries ago.

“How do you feel with this apology and reconciliation effort?” Barnett asked.

“I think an apology is always a good place to begin,” Royal said. “Georgetown is perfectly positioned to be a role model in how you have these types of difficult conversations.”

Georgetown Senior Ayodele Aruleba, who was a member of the working group that looked into the school’s painful past, said plenty of work lies ahead.

“Although this is a first good step on behalf of Georgetown University, I am really looking forward to future initiatives and further commitments of resources that the university has to reconcile the legacies of slavery still seen today,” Aruleba said.

There are currently no plans to offer scholarships for those descendants, but keep in mind Georgetown is one of the country’s few need-blind, full-cost schools. The president explained this ensures no undergraduate is prevented from attending because of financial need.