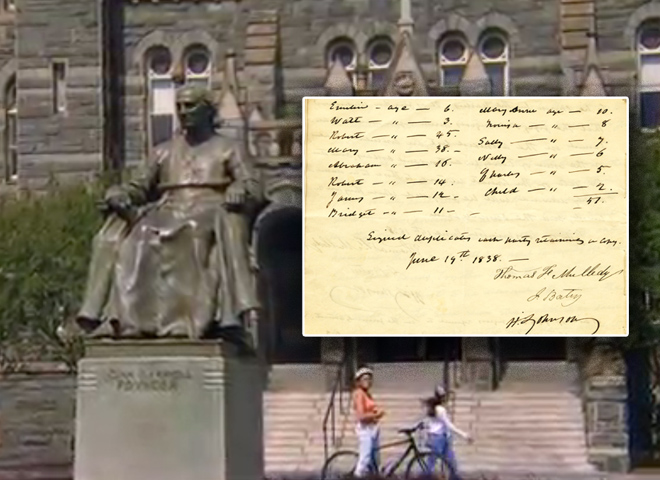 WASHINGTON - Georgetown University will give preference in admissions to the descendants of slaves owned by the Maryland Jesuits as part of its effort to atone for profiting from the sale of enslaved people.

He says Georgetown will need to identify and reach out to descendants of slaves and recruit them to the university.

On Thursday morning, a university committee released a report that also called on its leaders to offer a formal apology for the university’s participation in the slave trade.

The chair of the Working Group on Slavery, Memory, and Reconciliation, David Collins, S.J., says he hopes the university can take full responsibility for its slave benefactors. “As we join the Georgetown community we must understand that part of our history is this history of slaveholding and the slave trade,” he said. “And that opens our eyes to broader social issues that are still unhealed in our nation.

“History matters up to the present and into the future.”

In 1789, when the original Georgetown College was founded, Jesuit-owned and -operated plantations in Maryland (which helped fund the new institution) were worked with slave labor. Profits from the plantations were foreseen as a means to fund the new school.

In 1838, two priests who served as president of the university orchestrated the sale of 272 people to pay off the school’s debts. The slaves were sent from Maryland to plantations in Louisiana. The school received $115,000 in the sale, the equivalent of about $3.3 million today.

In response to the committee’s recommendations, President DeGioia today announced several steps that would be taken, including:

Richard Cellini, an alumnus of Georgetown who has researched the slave sale, told “CBS This Morning”​ in July he estimates there are between 10,000 and 15,000 descendants of the 272 slaves sold living today.