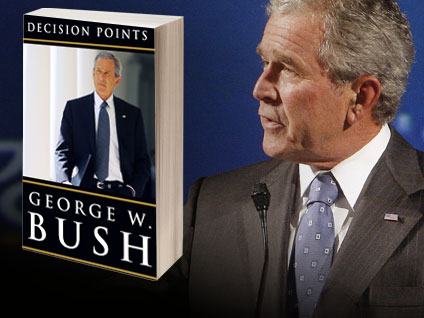 Former President George W. Bush is still unpopular with more than half of Americans in the latest polls, but that hasn't stopped the strong sales of his new memoir "Decision Points."

The book sold 775,000 copies in its first week of release, Crown Publishers announced Tuesday, and its initial print fun of 1.5 million has been increased to 1.85 million copies.

Mr. Bush has given a number of interviews in recent weeks to promote his book, to CBS News ' Jim Axelrod, talk show host Oprah Winfrey, Matt Lauer of NBC's "Today Show," and many others.

"We expect his book will be one of this holiday season's biggest-selling titles," Crown's senior vice president and publisher, Tina Constable, said in a statement.

The memoir touches on a range of issues from Mr. Bush's presidency, such as the terrorist attacks of Sept. 11, 2001, the wars in Iraq and Afghanistan and Hurricane Katrina.

While "Decisions Points" has sold an impressive number of copies, Mr. Bush's memoir did not sell as well in its first week as former President Bill Clinton's memoir "My Life," which sold more than 900,000 copies.

Mr. Bush's book sold about as well as former Alaska Gov. Sarah Palin's first book, "Going Rogue," which also sold around 700,000 copies in its first week last year. Palin will soon embark on a book tour for her second book, " "American by Heart: Reflections on Family, Faith, and Flag," which comes out Nov. 23.