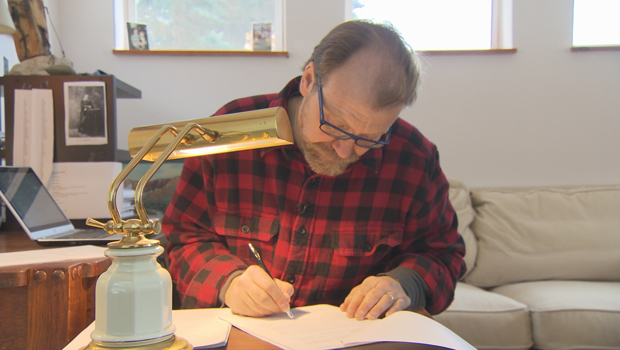 Many notables deliver graduation speeches this spring. We have a speech to college students to tell you about, By George (Saunders), the short-story writer. Here's Mo Rocca:

He might be the most celebrated short-story writer of his generation. But when George Saunders was asked to address graduates at Syracuse University, he was stumped.

"I thought, you know, what am I giving a speech to a bunch of kids who are better educated than I was, have already made better choices than I did at that age?" he told Rocca. "What do I have? And what I had was, basically, time. You know, I'd had all these years of living."

The message Saunders finally came up with was disarmingly simple:

"What I regret most in my life are failures of kindness -- those moments when another human being was right there, in front of me, suffering, and I responded sensibly, reservedly, mildly. ... It's a little facile, maybe, and certainly hard to implement, but I'd say, as a goal in life, you could do worse than: Try to be kinder."

Rocca noted, "In the speech you said, 'Your life is going to be a gradual process of becoming kinder and more loving.' That's a pretty optimistic assumption."

"Yeah, actually in an early draft, I had a line, 'Unless it's not, and you're gonna be a bitter old fart someday,'" Saunders laughed. "But for that day, I would leave it out."

The speech turned into yet another bestseller for Saunders. But it's in fiction that he's really made his mark. George Saunders knows what makes for a good story.

Saunders brought Rocca to a snowy field in Syracuse, N.Y., the setting for the title story of his collection, "Tenth of December." In that story, a little boy crosses paths with a man who has decided to kill himself. "Yeah, he has this vision that he'll go up there somewhere and sit very peacefully and just ease his way out," said Saunders. "And then the little boy, Robin, is just out goofin' around, he's got this kind of vivid fantasy life."

But when the little boy falls into an icy pond, the man switches from thoughts of suicide to a desperate attempt to save the boy's life:

"He had to get the kid warmed up. How to do it? Hug him, lie on top of him? That would be like Popsicle-on-Popsicle."

Saunders' stories have made him a critical favorite. They're dark, funny and compassionate. And like the story of Saunders' own life, they take surprising twists and turns.

When that didn't pan out, he ended up at, of all places, the Colorado School of Mines, then got a job scouting for natural resources in the jungles of Indonesia.

But deep down he wanted to be a writer. And he figured if he mined his travels for material, well, that would surely make him the next Hemingway.

"It's kind of a beginner error -- 'The reason I'm no good as a writer is that I haven't done anything yet. I haven't lived anything really cool,'" he told Rocca. "So then, that was a great education -- to go there and have a lot of amazing experiences, and typing it up and going, 'Oooh, that's not actually a story. It's just some typing.'"

He came back to the U.S. Now married and with two young daughters to support, he had to make a living. So he got a job in an office writing technical reports. It was at an office park in Rochester. "Corporate Woods, it was called, actually, yeah!"

He tried his best to write fiction during breaks.

"I had this 700-page manuscript that was titled 'La Boda de Eduardo,' which I think means, 'Ed's Wedding.' Finally gave it to my wife and I was so happy -- I thought, 'I can't believe I accomplished this!' So she took it to read and I kind of peeked around the corner. And she must have been maybe on page three. And she just was sitting there with her head in her hands.

But he'd been doing another kind of writing back at the office park when he was bored. One night his wife stumbled on that work.

"I was just writing these little poems, almost Dr. Seuss kind of limericks," he said. "Brought it home that night and threw it on the table and went out to do something with the kids. And I heard Paula laughing -- I mean, really genuinely laughing. I hadn't had anyone read something I'd written with genuine pleasure in about six years. And I thought, 'Ah, dummy, that's what it is!'"

Finally, at the age of 37, Saunders published his first collection of short stories. He's won increasing acclaim with each book and essay.

The guy who barely got into college now teaches writing to university students. Hundreds of Syracuse graduate students compete to get into his small class.

"Is it pretty invigorating to be on a campus around all these young people?" asked Rocca.

"Yeah, it really is. It's a little nerve-wracking, you know, 'cause with this level of student you can never phone it in."

But for all his success, George Saunders still finds a lot to fret over -- like every time he looks at his latest story.

"If I look at a ten-page thing that I've written, I always have a feeling kind of like, 'Oh, I don't know, who wants to read ten pages of you?'" Saunders said. "Can you get it in seven? Seven they might be able to tolerate."