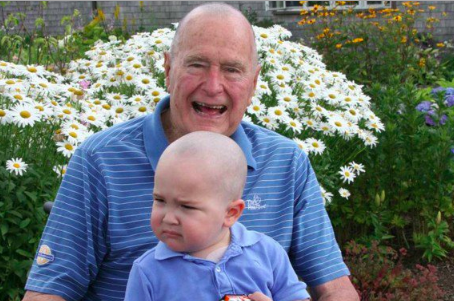 The Secret Service is sharing a touching memory of former President George H.W. Bush, the day before he is laid to rest. When Mr. Bush learned in 2013 that the 2-year-old child of an agent on his security detail was diagnosed with leukemia, and that the team planned to shave their heads in support, in "classic 41 manner" Mr. Bush shaved his head too.

The post includes images of the president with a shaved head and the little boy on his lap, as well as an image of people who appear to be his detail, all sporting shaved heads.

Three years later, in November 2016, Mr. Bush's Twitter account shared an update with a photo of himself and the boy, identified only as Patrick. "Incredibly #thankful that my friend Patrick, the courageous young man (with hair!) to my left, is feeling and doing much better these days," he tweeted.

In the 2016 tweet, the former president attached the image from 2013, as well as a more recent photo of himself and the child with full heads of hair.

The Bush family was personally touched by the trauma of childhood leukemia years ago, when George and Barbara Bush's second child, a girl named Robin, died of the disease in 1953. She was only 3 years old.