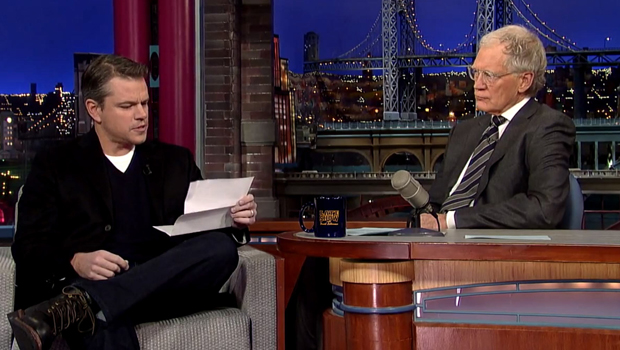 George Clooney attempted to prank Golden Globe hosts Tina Fey and Amy Poehler, but he couldn't pull one over on these "grown-ass" comedians.

Clooney's "Monuments Men" co-star Matt Damon explained what went down on Wednesday night's "Late Show with David Letterman," explaining that he knew something was up when he got two huge fruit baskets delivered to his home, both with notes.

Damon, 43, told Letterman that the first note read: "I thought you of all people could take a joke and listen we're both really sorry." (Referring to when the women referred to him as a "garbage man" during the Globes.)

The second letter read: "If your note is part of some George Clooney prank, as I very strongly suspect it is, you A-list amateurs are going to have to step it the [expletive] up. We are not some easily confused starlets here. We are grown-ass, professional comedians. Please accept this fruit as a token of our sincerity. Best wishes, Elizabeth Tina Fey, Amy 'Boston' Poehler."

The women were right. Clooney did send them a letter supposedly written by Damon. "It says, 'Look, it sounds hypocritical because I laughed at jokes about George and Leo, but that's sort of what people think about them,'" the 51-year-old revealed during a Sirius Town Hall event. "But when you call me a garbage man it just seems like low-hanging fruit. It seems like an easy joke. I don't want an apology or anything else. I just want you to know that my kid now calls me 'the garbage man.'"

During this year's Golden Globes, Fey made a joke about Clooney in the show's monologue, saying, "Gravity is nominated for best film: It's the story about how George Clooney would rather float away into space and die than spend one more minute with a woman his own age."