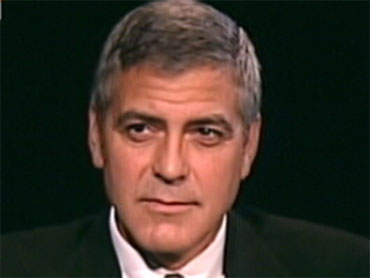 This coming January, the people of Sudan, Africa's largest country, will vote on whether the nation should split in two.

The election results could spark a new outbreak of the civil war that took two million lives before ending in 2005.

Actor and activist George Clooney and John Prendergast, co-founder of the Enough Project, recently returned from a nine-day trip to Sudan, and they met Tuesday with President Obama to discuss efforts to prevent another disaster there.

On "The Early Show" Clooney and Prendergast spoke with co-anchor Harry Smith about their efforts.

Smith pointed out to Clooney, "This splitting of Sudan in two seems of a done deal, a fait accompli. What is your biggest fear about what will happen if -- and when -- this country splits in half?"

Clooney said, "Well, we know what's happened before when they went to war two and a half million people died in that 21-year war that ended with a negotiated peace agreement. There's more than a good chance, I'm not saying this, this is from the State Department said it is a ticking time bomb. The CIA said it's the place most likely to have atrocities, including genocide. The president, we met with (U.S. Senator Dick Lugar (R-Ind.)) yesterday. Everyone has the same fear, which is that a lot of people could be dying -- could die."

Prendergast said the stakes have "risen dramatically" in the last 10 years as oil is exploited in the south.

"Sudan now is the third largest oil producer in Africa, which is no mean feat because Nigeria and Angola produce about 15 percent of exports. There is a lot of stake in the north losing in the south where the oil is, that would be the bill loser. So, they are going to fight it and that's what's putting the two parties at extreme risk of war. The only solution is a diplomatic one and the United States is going to play a major role in, that if we gird our loins and get in there and try to stop the war."

Clooney said when he spoke to Obama, the president expressed his devotion to the effort.

"We wanted to let him know, first of all, that we were going to try and find as much support as he could, as much political will," Clooney said. "The good news is, is this one of those issues even in the most politicized season I think I've ever seen that isn't political at all. Both Republicans and Democrats -- everyone sort of agrees on diplomatic measures. We are very happy to see how involved, really involved, the president personally is in this issue because he understands that now, in 88 days from now, you can do all of this diplomatically, it won't cost a dime, and it won't cost American lives now. In 88 days, it's going to be mopping up a mess or there's a very good possibility and he has, right now, a great commitment at trying to avoid that."

For more with Clooney and Prendergast on their diplomacy efforts in Sudan, click on the video below.