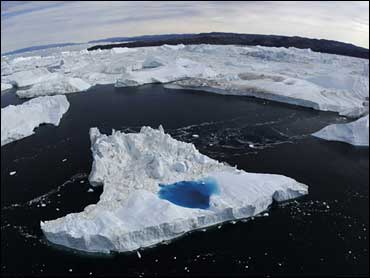 Tinkering with Earth's climate to chill runaway global warming - a radical idea once dismissed out of hand - is being discussed by the White House as a potential emergency option, the president's new science adviser said Wednesday.

That's because global warming is happening so rapidly, John Holdren told The Associated Press in his first interview since being confirmed last month.

The concept of using technology to purposely cool the climate is called geoengineering. One option raised by Holdren and proposed by a Nobel Prize-winning scientist includes shooting pollution particles into the upper atmosphere to reflect the sun's rays.

Using such an experimental measure is only being thought of as a last resort, Holdren said.

His concern is that the United States and other nations won't slow global warming fast enough and that several "tipping points" could be fast approaching. Once such milestones are reached, such as complete loss of summer sea ice in the Arctic, it increases chances of "really intolerable consequences," he said.

Twice in a half-hour interview, Holdren compared global warming to being "in a car with bad brakes driving toward a cliff in the fog."

He and many experts believe that warming of a few degrees more would lead to disastrous drought conditions and food shortages in some regions, rising seas and more powerful coastal storms in others.

At first, Holdren characterized the potential need to technologically tinker with the climate as just his personal view. However, he went on to say he has raised it in administration discussions.

"We're talking about all these issues in the White House," Holdren said. "There's a very vigorous process going on of discussing all the options for addressing the energy climate challenge."

Holdren said discussions include Cabinet officials and heads of sub-Cabinet level agencies, such as NASA and the Environmental Protection Agency.

The 65-year-old physicist is far from alone in taking geoengineering seriously. The National Academy of Sciences is making it the subject of the first workshop in its new climate challenges program for policymakers, scientists and the public. The British Parliament has also discussed the idea. At an international meeting of climate scientists last month in Copenhagen, 15 talks dealt with different aspects of geoengineering.

The American Meteorological Society is crafting a policy statement that says "it is prudent to consider geoengineering's potential, to understand its limits and to avoid rash deployment."