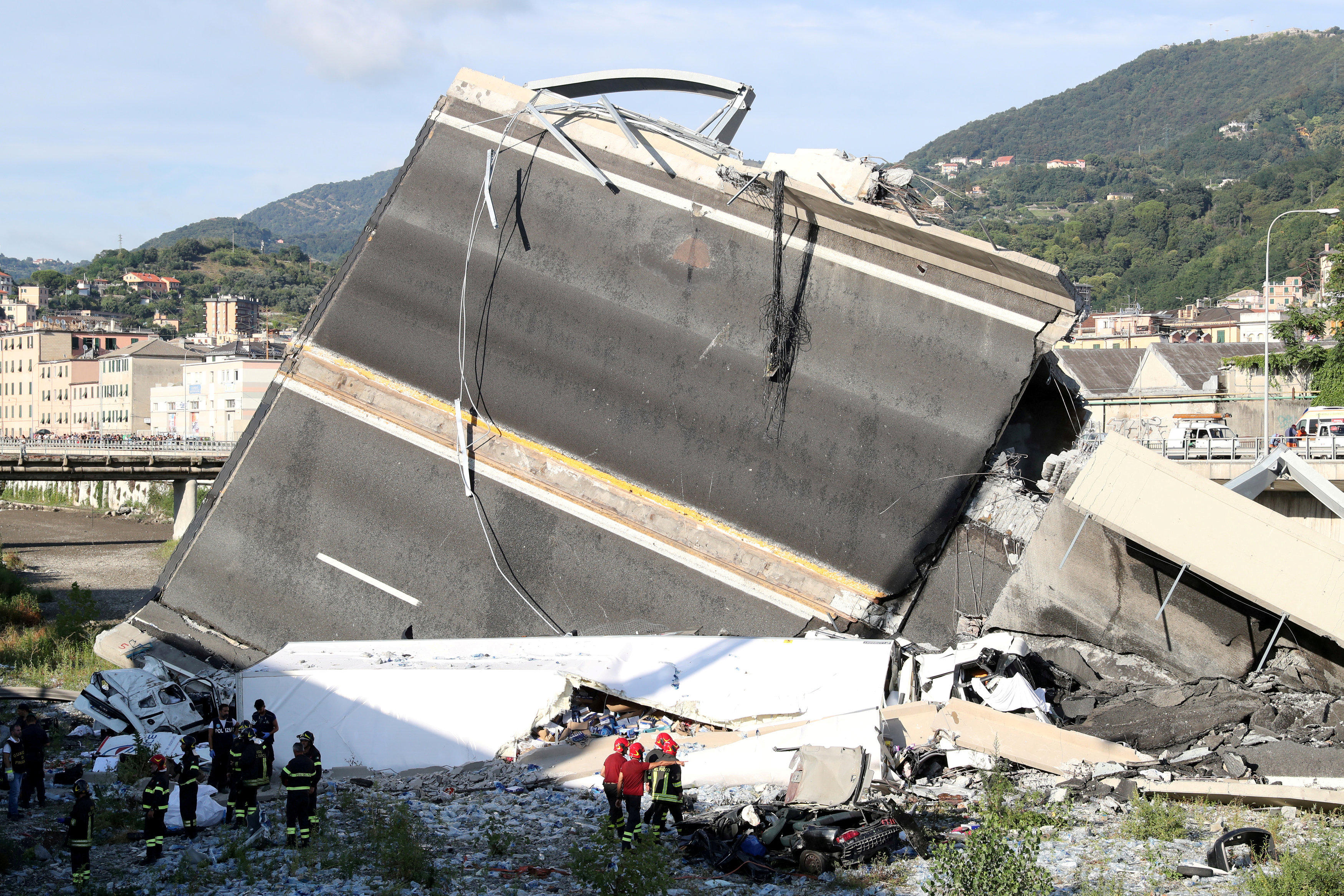 GENOA -- Residents of the northern Italian city of Genoa awoke Wednesday to a new skyline, and a new reality; the bridge that suddenly ceased to exist, taking so many lives with it. CBS News correspondent Charlie D'Agata reports that rescuers with sniffer dogs searched through the night in a desperate hope that somewhere, buried beneath the huge slabs of concrete, someone had managed to survive the catastrophic collapse.

Fire officials in charge of the search and rescue operation said it was like searching for earthquake victims. They pulled two more bodies from the wreckage on Wednesday, raising the death toll to 39.

During a heavy rain storm, the Morandi Bridge suddenly crumbled on Tuesday morning, plunging 150 feet down onto a riverbed, buildings and city streets below, taking dozens of vehicles and everyone inside them with it.

Davida Di Giorgio shot the video on his cell phone which captured the moment of the collapse. He said he couldn't believe his own eyes.

"When I woke up this morning, I hoped it was a nightmare," he said. But he quickly realized it was a sad reality.

The collapse of what has now been dubbed "the bridge of death" in Italy left a gaping hole in the heart of this city -- and many unanswered questions about whether the structure, which local residents say was under a constant state of repair, was still fit for purpose half a century after it was built.

Some 60,000 vehicles would cross the Morandi Bridge every day; families on summer vacation, employees on their commute, and truckers ferrying goods from one side of the city to the other.

Now almost 40 of those people are known to have been victims of this week's disaster. But for a few seconds on that bridge in either direction, they would be alive today.

The despair of the city, and the nation, was rapidly turning to anger on Wednesday.

Genoa's public prosecutor has already promised a criminal investigation into the tragedy, suggesting the collapse was the result of negligence.

Deputy Italian Prime Minister and Interior Minister Matteo Salvini has pointed the finger at the private company which manages the bridge, saying it has earned "billions" from tolls on the highway but "did not spend the money they were supposed to" on maintenance and suggesting its concession should be revoked.

"Imposing the highest penalties possible and making sure that those responsible for the dead and the injured pay up for any damages and crimes is the very least," Salvini said. He said fines as high as 150 million euros ($170 million) could be levied against the bridge's operator.

An Italian firm, Autostrade, part of the Milan-listed Atlantia group, manages the highway and bridge which formed part of it. It said on Tuesday, after the collapse, that maintenance work was underway to fortify the structure, but that "work and the status of the viaduct were subject to constant observation and supervision."

"The causes of the collapse will be the object of in-depth analysis" by the company as soon as it can safely access the site, Autostrade said.

Italy's transportation and infrastructure minister, Danilo Toninelli, from the populist 5-Star Movement, threatened in a Facebook post that the Italian government could take direct control of the highway agency if it couldn't properly maintain the country's roadways.

Italian state radio said Wednesday, meanwhile, that some members of the 5-Star Movement had questioned in 2013 the wisdom of an ambitious infrastructure overhaul program as wasteful. The post about that project on the Movement's website was removed after the bridge's collapse.

The 5-Star Movement shot to national power in Italy over the course of the last year, amid rising tensions over immigration amid a European migrant crisis.