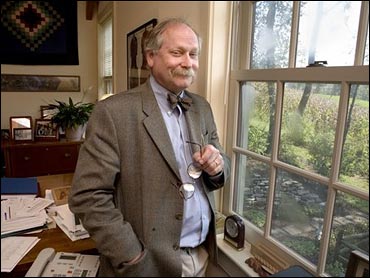 A doctor treating children with genetic diseases in Pennsylvania's Amish country, a New England turtle expert and a former child math prodigy who teaches at UCLA are among the 25 winners of this year's MacArthur Foundation "genius grants."

The $500,000, no-strings-attached fellowships, announced Tuesday by the Chicago-based John D. and Catherine T. MacArthur Foundation, recognized people in a wide variety of fields.

Other winners included a master glassblower from New York, a deep-sea explorer from Florida and a Harvard University professor from Argentina who is working to uncover the early history of the cosmos.

"These awards are about more than money. They carry an affirmation not only of individual creativity but also are a mark of respect for a whole field of endeavor," said Jonathan F. Fanton, president of the MacArthur Foundation. "These are activities that society doesn't always give proper due or comment to."

Among the fellows is David Carroll, who was 8 the first time he wandered into a Connecticut wetland and came face-to-face with a turtle. The naturalist, author and illustrator - now 64 - has spent decades recording the ecology of New England, especially around his home in New Hampshire.

"It's such an affirmation," Carroll said of the fellowship. "To be able to look ahead and know that I have a period of time to focus mainly on creative efforts and not the daily staying afloat that most of us have ... it enables my concentration on expanding my creative efforts."

The grants are awarded by an anonymous 12-member selection committee and the foundation's board of directors. The foundation has named 732 fellows since 1981.

One of this year's winners is Kevin Eggan, 32, an expert in embryonic stem cells and somatic cell nuclear transfer, otherwise known as therapeutic cloning.

"This is a field that has been much discussed. Its legitimacy, its importance have all been matters of public debate, and I think that a thoughtful nod from a group like the MacArthur Foundation sends a nod of support," Eggan said.

Another fellow, D. Holmes Morton, 55, is a pediatrician who studies inherited disorders in rural Strasburg, Pa. Along with his wife, Caroline, Morton founded the nonprofit Clinic for Special Children, which has reduced child mortality in Lancaster County's Amish and Mennonite communities.

"My work during the MacArthur fellowship will help assure the future of the clinic, including patient care and case studies," Morton said. "But beyond such obvious goals, I would not want the direction of my work over the next five years to be entirely predictable - that would be uncharacteristic of me or my life."

For Australian Terence Tao, 31, the fellowship comes weeks after the UCLA professor won the Fields Medal, often described as the "Nobel Prize of math."

"It's completely unexpected, I didn't have any inking at all, which is quite a contrast to the Fields Medal, where you hear rumors here and there," Tao said.

New York playwright Sarah Ruhl, 32, was a finalist last year for a Pulitzer Prize for the play "The Clean House." She said the fellowship will give her the freedom to pick projects she is passionate about.

"You don't go into theater expecting to have this kind of money," Ruhl said. "I was just kind of flabbergasted at the goodness of the universe. It's amazing."

Here is the foundation's complete list of 25 genius grant recipients. Each will receive $500,000 over the next five years: